The leader of one of Hong Kong's largest pro-democracy groups has been taken to hospital after being attacked. 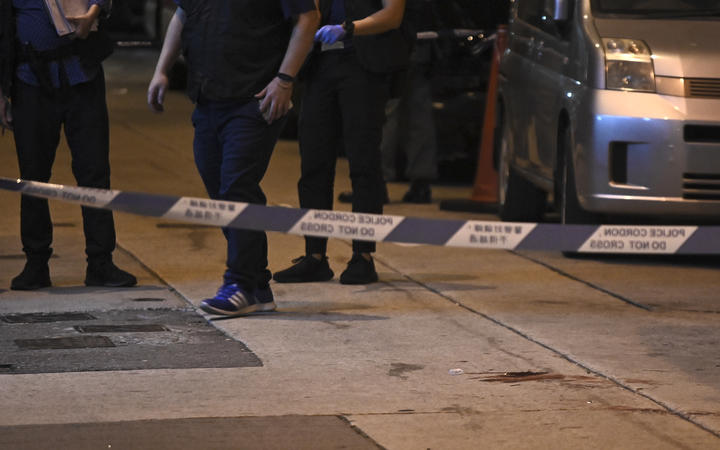 Blood is seen beyond a police cordon, where Jimmy Sham, convener of the Civil Human Rights Front (CHRF), was assaulted by four to five people wielding hammers. Photo: AFP

It came hours after the territory's leader suspended her annual address after being heckled in parliament.

Mass protests in support of greater democracy in the territory began in June and show no sign of abating.

Reports say he was set upon by a group of up to five hammer-wielding men in the Mong Kok district of the Kowloon peninsula, and left with head injuries.

His CHRF group said he was conscious as he was taken to hospital.

It was the second time he had been attacked since the protests began.

The CHRF linked the attack to government supporters, who are suspected of assaulting other pro-democracy activists in recent months.

"It is not hard to link this incident to a spreading political terror in order to threaten and inhibit the legitimate exercise of natural and legal rights," it said in a statement.

The non-violent protest group, which organised several huge marches earlier in the summer, said it was applying for a police permit to hold a new march on Sunday.

Its recent requests have been rejected by the authorities, while more hardcore activists have held protests in defiance of bans and clashed with police.

Amnesty International has urged the authorities to launch an investigation into the attack on Mr Sham.

"Jimmy Sham was left bleeding on the street and has been hospitalised with head injuries. Even in the context of increasing attacks on activists, this incident is shocking in its brutality," said the head of the rights group's East Asia regional office, Joshua Rosenzwei.

After a first interruption, the session resumed only to be interrupted again.

It was then suspended - and a pre-recorded speech by Ms Lam was made available on the Legco website instead.

It was the first time a Hong Kong chief executive had been unable to deliver a policy address in the chamber.

It meant a controversial extradition bill - the trigger for the months of protests - could not be withdrawn formally.

The bill was suspended in July, but Wednesday's meeting was the first time the Legco had resumed since it was stormed by protesters in July, and was the first opportunity to withdraw the bill altogether.

As Ms Lam was about to begin her speech, opposition lawmakers began shouting and climbing on tables.

They also projected the words "Five demands - not one less" on the wall behind her. Since the protests began, they have widened from rallies against the bill to five key demands - including universal suffrage.

"Both her hands are soaked with blood," she said. "We hope Carrie Lam withdraws and quits. She has no governance ability. She is not suitable to be chief executive."

Pro-establishment lawmakers condemned the interruption of the session, saying the address was important for Hong Kong's economic future.

In the address, Ms Lam stressed her commitment to "one country, two systems" - the parallel political system introduced in Hong Kong after British rule ended - and said calls for Hong Kong independence would not be tolerated.

She announced several housing and infrastructure policies, saying housing was the most urgent issue the city faces.

During a news conference after the address, Ms Lam rejected claims that her speech had ignored the demands of the protest movement.

But she said it was not the time to consider voting reform, while insisting Hong Kong did have freedom of speech and freedom of the press without Chinese interference.

The developments came just hours after Hong Kong protesters won a show of support from US lawmakers, who passed a bill aimed at upholding human rights in the city.