US President Donald Trump has said it is "not our problem" if Turkey enters Syria, calling the former US allies the Kurds "no angels". 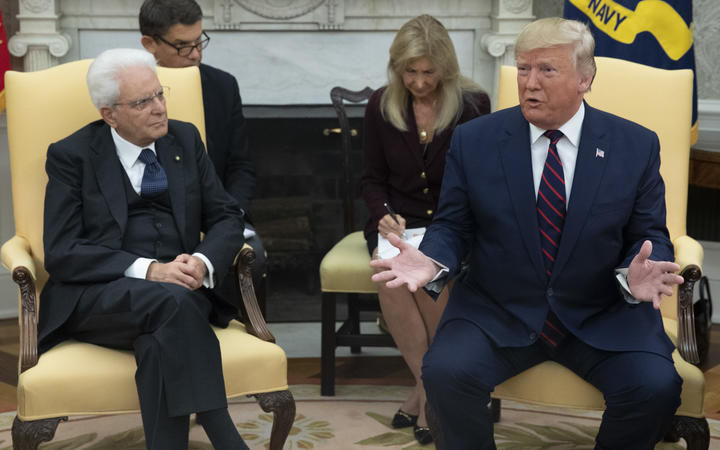 Mr Trump made the comments during a meeting with President Sergio Mattarella of Italy in the Oval Office. Photo: AFP

The US is facing intense criticism for withdrawing its forces from Syria, which some say gave Turkey the green light to launch a cross-border offensive against Kurdish-led forces.

Mr Trump told reporters at the White House the US is "not a policing agent".

Turkey launched the offensive in northern Syria a week ago to push back from its border members of a Syrian Kurdish militia called the People's Protection Units (YPG) and create a "safe zone" along the Syrian side of the border, where up to two million Syrian refugees can be resettled.

The Turkish operation came after Mr Trump ordered the withdrawal of US forces from the area.

Kurdish-led forces have been a key ally of the US in the fight against Islamic State in Syria and there are fears the destabilisation could lead to a resurgence of the militants.

Mr Trump said he saw the situation on the Turkey-Syria border as "strategically brilliant" for the US.

"We're watching and we're negotiating and we're trying to get Turkey to do the right thing, because we'd like to stop wars regardless."

The president also said that the Kurds are "not angels".

Mr Trump added that the Kurdistan Workers' Party (PKK) - a rebel group that fights for Kurdish autonomy in Turkey - "is probably worse at terror and more of a terrorist threat in many ways than" Islamic State.

Ankara sees the YPG militia as an extension of the PKK.

The US has designated the PKK as a foreign terrorist organisation and Specially Designated Global Terrorist Entity. The US has previously acknowledged links between the PKK and YPG, but it has rejected Turkey's assertion that the YPG is an extension of the PKK.

The YPG dominates an alliance of Kurdish and Arab militias called the Syrian Democratic Forces (SDF), which has driven the Islamic State (IS) group out of a quarter of Syria over the past four years with the help of air strikes by a US-led multinational coalition.

On Sunday, after US troops began withdrawing from the region and Turkish-led forces made gains, the Kurds agreed a deal with the Syrian government for the Syrian army to be deployed on the border to help repel the Turkish assault.

The US announced sanctions against Turkey on Monday (Tuesday NZT).

On Wednesday (Thursday NZT), a spokesman for Turkey's President Erdogan said the country's foreign ministry was preparing retaliatory sanctions against the US.

Ankara has vowed to continue its offensive, and has refused to negotiate with Kurdish fighters.