Turkish President Recep Tayyip Erdogan says that Turkey will "crush the heads" of Kurdish fighters if they do not withdraw from a planned safe zone area in northern Syria. 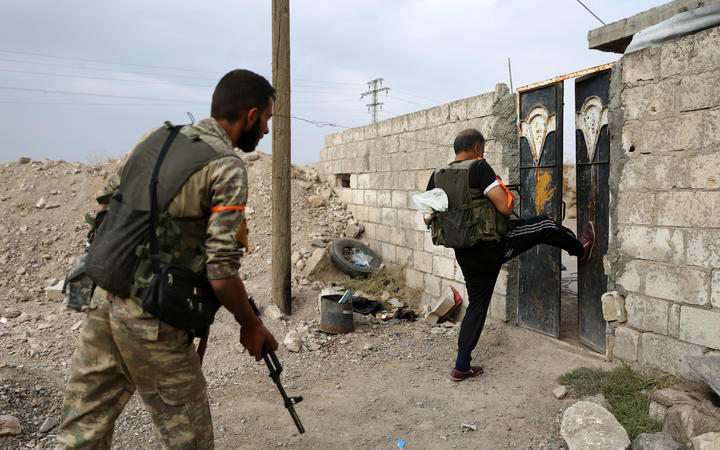 Turkey-backed Syrian fighters break open the front door of a house at a postition that they are holding in the Syrian border town of Ras al-Ain on October 19, 2019. Photo: AFP

Turkey agreed on Thursday to suspend an offensive for five days to allow the Kurds to retreat from the area.

But on Saturday both sides accused the other of violating the ceasefire.

Ankara views the Kurdish forces as terrorists and wants to create a "safe zone" buffer inside Syria.

Despite the temporary ceasefire, some sporadic violence has continued - particularly around the border town of Ras Al-Ain.

What did Erdogan say?

Speaking at a televised event in the central Turkish province of Kayseri on Saturday, President Erdogan said that if Kurdish fighters did not withdraw by Tuesday evening - as agreed in the ceasefire - "we will start where we left off and continue to crush the terrorists' heads".

The Turkish leader is due to hold talks next week with Russia's President Vladimir Putin. On Saturday he said that if those talks did not produce a solution, Turkey would "implement its own plans". 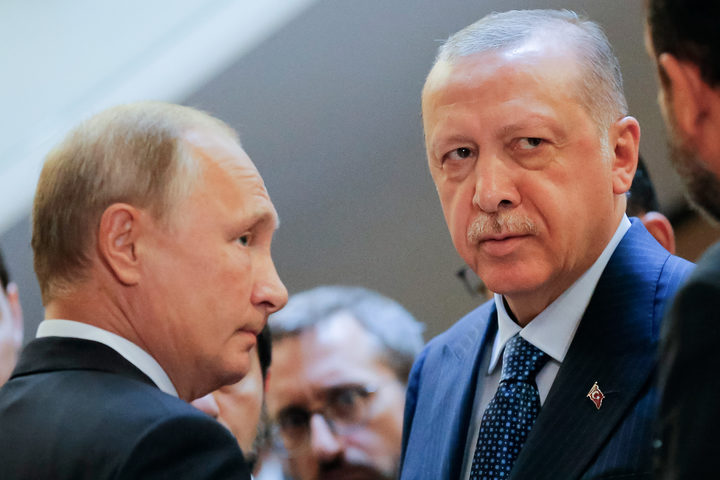 Russian President Vladimir Putin and Turkish President Recep Tayyip Erdogan will meet in a few days to discuss their positions on the conflict in Syria. Photo: AFP

Turkey's defence ministry earlier accused Kurdish forces of carrying out 14 "provocative" attacks in the last 36 hours, mostly in Ras Al-Ain, but insisted Turkish forces were fully abiding by the agreement.

However, the Kurdish-led Syrian Democratic Forces (SDF) accused Turkey of violating the ceasefire.

They also accuse Turkish troops of failing to create a safe corridor for the evacuation of civilians and wounded people from the besieged town.

On Saturday the SDF urged US Vice-President Mike Pence, who helped to broker the temporary ceasefire, to pressure Turkey to allow the passage of civilians.

"Despite the constant communication with the American side and the promise made by them to solve this problem, there has not been any tangible progress in this regard," the SDF said in a statement.

The UK-based Syrian Observatory for Human Rights (SOHR) alleges that deliveries of humanitarian aid have also been prevented from entering Ras Al-Ain.

The monitor group said on Friday that the civilian death toll from the Turkish operation had now risen to 86.

What prompted the offensive?

Turkish forces first launched their assault on 9 October, following an announcement US troops would withdraw from the Syria-Turkey border region.

The Turkish plan is to clear Kurdish fighters from a buffer zone extending more than 30km into Syria. It would run for about 440km along the border, President Erdogan said on Friday, and be monitored from observation posts.

Turkey also plans to resettle up to two million Syrian refugees, currently on its territory, in the buffer zone but critics warned the move could trigger the ethnic cleansing of the local Kurdish population.

The goal was to push back a Kurdish militia group - the People's Protection Units (YPG) - that Turkey views as a terrorist organisation.

Since the offensive was launched, President Donald Trump has been accused by some, including senior Republicans, of abandoning a US ally. The SDF - a group dominated by the YPG - fought alongside the US against the Islamic State (IS) group in Syria.

There has been growing international concern about possible war crimes committed by Turkey and its allied militias during the offensive.

Amnesty International says it has gathered "damning evidence" of war crimes and other violations by their side and the United Nations has called on Turkey to investigate the allegations.

The Organisation for the Prohibition of Chemical Weapons (OPCW) said it was aware of the claims and was gathering evidence.

What is the latest with the ceasefire?

The pause in hostilities followed talks in the Turkish capital Ankara between Mr Erdogan and Mr Pence on Thursday.

President Trump celebrated news of the ceasefire and claimed the pause in hostilities would lead to "millions of lives" being saved. He remained optimistic in comments made on Friday, despite reports the ceasefire was failing to hold.

SDF spokesman Mustafa Bali tweeted on Friday morning to allege that Turkey was breaking the ceasefire near Ras al-Ain.

"Despite the agreement to halt the fighting, air and artillery attacks continue to target the positions of fighters, civilian settlements and the hospital," he wrote.

President Erdogan dismissed reports of continuing clashes on Friday as "misinformation" but international news media recorded explosions in Ras al-Ain during the morning.

The SOHR said on Saturday that the SDF had not yet started to pull back from the border region.

Local Kurdish media are reporting that five civilians and 13 Kurdish fighters in Ras-al-Ain have been killed since the ceasefire began, but the BBC has not been able to independently confirm that.