Turkey has pounded Kurdish militia in northeast Syria for a second day, killing dozens, in a conflict with US allies that has turned the Washington establishment against Donald Trump. 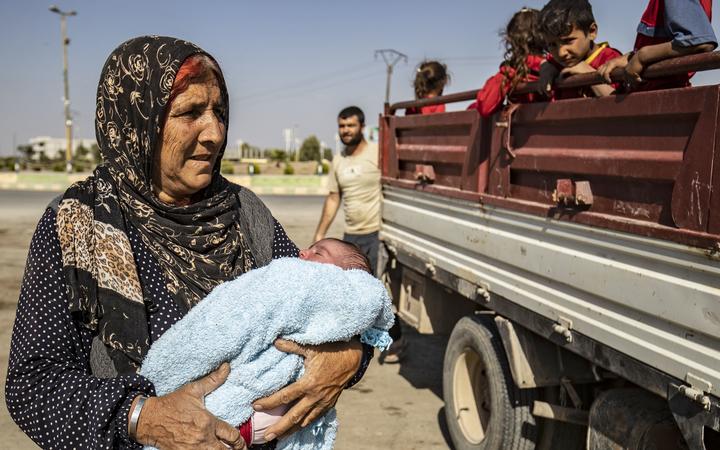 Syrian Arab and Kurdish civilians arrive to Tall Tamr town, in the Syrian northwestern Hasakeh province, after fleeing Turkish bombardment on the northeastern towns along the Turkish border. Photo: AFP

The Turkish offensive against the US-allied Syrian Democratic Forces, launched days after Mr Trump pulled US troops out of the way, opens one of the biggest new fronts in years in an eight-year-old civil war that has drawn in global powers.

At least 23 fighters with the Kurdish-led Syrian Democratic Forces (SDF) and six fighters with a Turkish-backed Syrian rebel group had been killed, said the Syrian Observatory for Human Rights, which monitors Syria's eight-year-old war.

The SDF said Turkish air strikes and shelling had also killed nine civilians. In an apparent attempt by Kurdish-led forces to retaliate, mortar fire from Syria killed three people including a child in the Turkish border town of Akcakale, hospital and security sources said.

The International Rescue Committee said 64,000 people in Syria have fled since the campaign began, the Observatory said. The towns of Ras al-Ain and Darbasiya, some 60km to the east, have been largely deserted as a result of the attack.

The Observatory said Turkish forces had seized two villages near Ras al-Ain and five near the town of Tel Abyad.

Turkish President Tayyip Erdogan told members of his AK Party in Ankara that 109 militants had been killed so far. Kurds said they were resisting the assault.

According to a senior Turkish security official, the armed forces struck weapons and ammunition depots, gun and sniper positions, tunnels and military bases. 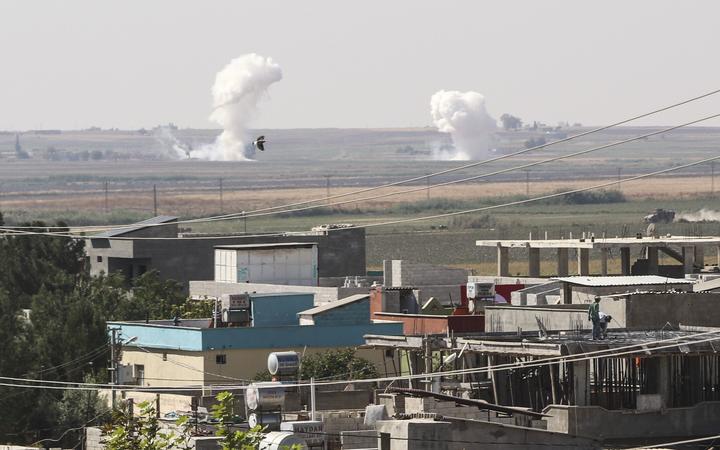 "The operation is currently continuing with the involvement of all our units," Mr Erdogan said in a speech.

Mr Trump, who has faced rare criticism from senior figures in his own Republican Party who accuse him of deserting loyal US allies, said on Twitter he was talking to "both sides". He warned Ankara it would be hit hard financially if it did not "play by the rules".

The SDF have been the main allies of U.S. forces on the ground in the battle against Islamic State since 2014. They have been holding thousands of captured IS fighters and tens of thousands of their relatives in detention.

Threat to send refugees into Europe

NATO member Turkey has said it intends to create a "safe zone" for the return of millions of refugees to Syria.

But world powers fear the operation could intensify Syria's eight-year-old conflict, and runs the risk of Islamic State prisoners escaping from camps amid the chaos.

Mr Erdogan sought to ease those concerns, saying that militants from the jihadist group would not be allowed to rebuild a presence in the region.

Mr Erdogan took aim at the European Union and Arab powers Saudi Arabia and Egypt which have voiced opposition to the operation.

"They are not honest, they just make up words," Mr Erdogan said in a combative speech. "We, however, take action and that is the difference between us."

He threatened to permit Syrian refugees in Turkey to move to Europe if EU countries described his forces' move as an occupation. Turkey is hosting around 3.6 million people who have fled the conflict in Syria. 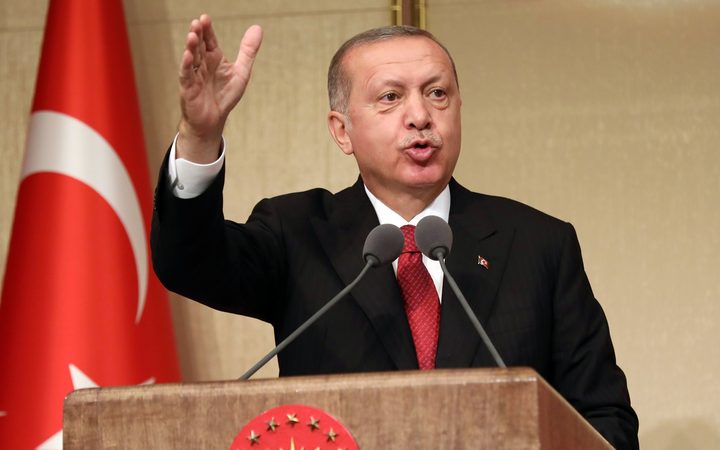 Turkish President Tayyip Erdogan has hit out at the EU and Saudi Arabia and Egypt after they criticised his military move into Syria. Photo: AFP

Ankara brands the Syrian Kurdish YPG militia as terrorists because of their ties to militants who have waged an insurgency in Turkey. But many members of Congress, and US officials, credit the Kurds with fighting alongside American troops to defeat Islamic State militants.

The Kurdish-led authority in northern Syria said a prison that holds "the most dangerous criminals from more than 60 nationalities" had been struck by Turkish shelling, and Turkey's attacks on its prisons risked "a catastrophe".

Turkish Foreign Minister Mevlut Cavusoglu said Turkey will be responsible only for Islamic State prisoners located within the safe zone it aims to form. Turkey would ask countries from which the prisoners came to take them back.

Mr Trump has called the Turkish assault a "bad idea" and said he did not endorse it. He said he expected Turkey to protect civilians and religious minorities and prevent a humanitarian crisis.

Republican Senator Lindsey Graham, usually a vocal Trump ally, has been one of the most outspoken critics of his decision to withdraw US troops from northeastern Syria. He unveiled a framework for sanctions on Turkey with Democratic Senator Chris Van Hollen.

Their proposed sanctions would target the assets of senior officials including Mr Erdogan, mandate sanctions over Turkey's purchase of a Russian S-400 missile defence system and impose visa restrictions.

They also would sanction anyone who conducted military transactions with Turkey or supported energy production for use by its armed forces, apart from US military assistance. The measure would require a report on Mr Erdogan's net worth and assets.

The United Nations Security Council was due to meet on Thursday to discuss Syria at the request of the five European members: Britain, France, Germany, Belgium and Poland.