US Secretary of State Mike Pompeo has confirmed he was listening in as the US President asked Ukraine to investigate a political opponent. 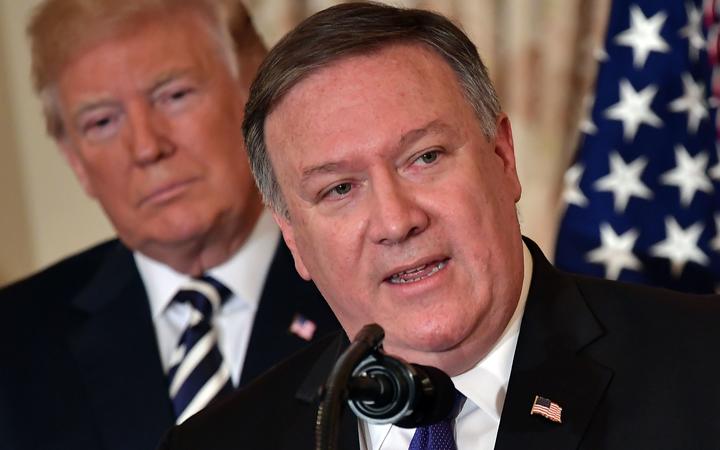 US Secretary of State Mike Pompeo dodged questions about US President Donald Trump's Ukraine call in an interview just days ago. Photo: AFP

The call - between Donald Trump and President Volodymyr Zelensky - is at the centre of a Democratic impeachment inquiry against Donald Trump.

Mr Pompeo dodged questions about the call in an interview just days ago.

During the conversation, which triggered a whistleblower's formal complaint, the US president asked Mr Zelensky to investigate Democratic rival Joe Biden and his son Hunter.

Mr Pompeo's admission during a news conference in Italy came after media reported he was party to the conversation as well. "I was on the phone call," Mr Pompeo said.

He did not directly answer a question on whether anything in the phone call alarmed him, but said it had focused on US policy with Ukraine.

"It's been remarkably consistent, and we will continue to try to drive those set of outcomes," he said.

On Tuesday, Mr Pompeo wrote to Democrats leading the impeachment effort to remove Mr Trump from office to say that he objected to their effort to "bully" five former and current state department officials who they wish to interview.

Mr Pompeo's presence on the call was reported earlier this week, but it is the first time he has addressed it directly.

When asked in a 22 September interview with ABC News what he knew of the conversation, Mr Pompeo said he had just been given the "whistle-blower complaint, none of which I've seen".

"You just gave me a report... none of which I've seen," Secretary of State Mike Pompeo tells @martharaddatz when asked about a report that President Trump pressed the President of Ukraine to work with Rudy Giuliani to investigate Joe Biden's son. https://t.co/CaWsz4XapY pic.twitter.com/coDl6mG6Dy

Pressed on whether Mr Trump's reported comments were appropriate, he responded: "I think I saw a statement from the Ukrainian foreign minister yesterday, said there was no pressure applied in the course of the conversation."

Mr Pompeo - the top US diplomat - was hit last week with a House subpoena to testify. On Tuesday three Democratic committee chairmen accused him of "stonewalling" the impeachment inquiry, adding that he is a "fact witness" to the probe.

His three day trip to Italy, which includes a private audience with Pope Francis, has largely been overshadowed by the impeachment efforts in Washington.