The lawyers for a whistleblower whose complaint triggered a US presidential impeachment inquiry say Donald Trump's words are endangering their client. 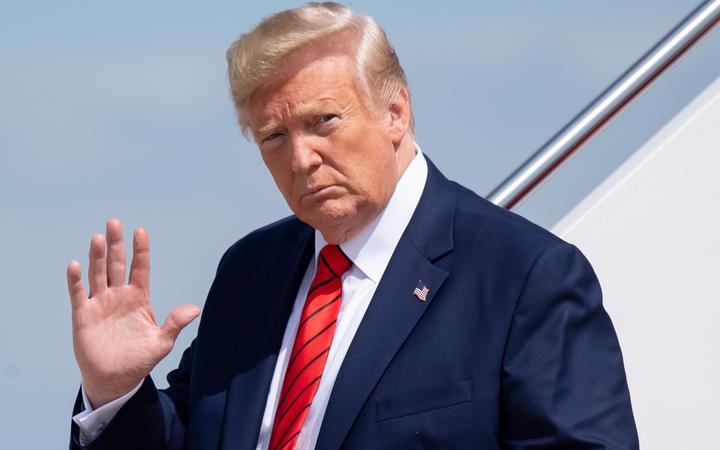 Since the transcript of his call with the president of Ukraine was revealed, Mr Trump has called for the anonymous whistleblower to be unmasked.

Democrats say the whistleblower will testify to Congress "soon" once steps are taken to protect their identity.

Mr Trump has suggested his opponents could be arrested for treason.

A transcript of a call Mr Trump made to Ukraine's new President Volodymyr Zelensky shows he urged him to investigate discredited corruption allegations against former vice-president and 2020 presidential candidate Joe Biden as well as his son.

The call is now at the centre of an effort by Democrats that could see Mr Trump expelled from office, but doing so would require members of his Republican party to turn against him.

What did the lawyers say?

The letter from the whistleblower's legal team - in which the lawyers call attention to Mr Trump's language - was sent to Acting Director of National Intelligence Joseph Maguire on Saturday, and made public on Sunday.

"The events of the past week have heightened our concerns that our client's identity will be disclosed publicly and that, as a result, our client will be put in harm's way," wrote lawyer Andrew Bakaj.

"You know what we used to do in the old days when we were smart? Right? With spies and treason, right? We used to handle them a little differently than we do now."

The letter also references a $US50,000 (£40,600) "bounty" that two conservative Trump supporters have offered as a "reward" for information about the whistleblower.

"Unfortunately, we expect this situation to worsen, and to become even more dangerous for our client and any other whistleblowers, as Congress seeks to investigate this matter," Mr Bakaj's letter adds.

On Sunday evening Mr Trump retweeted a Fox News guest who warned that if Mr Trump is removed from office it will spark "a Civil War like fracture in this Nation from which our Country will never heal".

It came as part of a massive Twitter volley against his critics, in which Mr Trump said he wanted to meet the whistleblower.

"I want to meet not only my accuser... but also the person who illegally gave this information, which was largely incorrect, to the 'Whistleblower.' Was this person SPYING on the US President? Big Consequences!"

On Monday, Mr Trump resumed his Twitter campaign against the whistleblower, as well as Democratic House Intelligence Committee Chairman Adam Schiff who is playing a leading role in the inquiry and has been one of the most vocal critics of the US president.

Over the weekend Republicans began to mount a campaign to defend Mr Trump, however some prominent Republican officials appeared to condemn Mr Trump for this latest scandal.

Tom Bossert, who served as Homeland Security Advisor under Mr Trump, told ABC News: "I'm deeply disturbed by it [the call] as well and this entire mess".

The impeachment inquiry launched on Tuesday now focuses specifically on Mr Trump's call to the Ukrainian president about the Biden allegations.

Democrats accuse Mr Trump of improperly seeking foreign help in the hope of smearing Mr Biden and of using military aid as a bargaining tool.

Ukrainian ex-prosecutor general Yuriy Lutsenko has told the BBC that there was no reason to investigate Mr Biden or his son Hunter Biden, who had worked for a Ukrainian energy firm.

Democrats in Congress - which is currently in recess - say they plan to remain in Washington over the break to move "expeditiously" on with impeachment hearings and subpoenas.

Lawmakers say in addition to the whistleblower, they also wish to speak with the president's personal lawyer Rudy Giuliani, who Mr Trump asked the Ukrainian president to co-ordinate with on an inquiry into the Bidens.