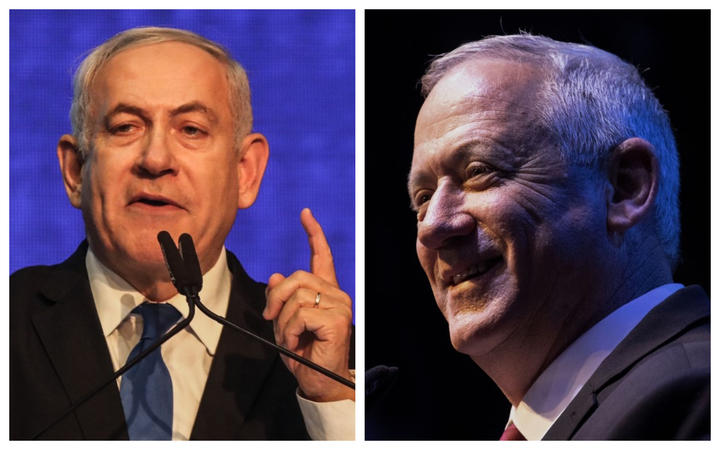 The centrist Blue and White alliance of former military chief Benny Gantz is projected to win between 32 and 34 seats, and Prime Minister Benjamin Netanyahu's right-wing Likud party 30 to 33 seats.

Mr Netanyahu called the snap vote after failing to form a governing coalition in the wake of an election in April.

Negotiations on the formation of a new coalition are expected to start as soon as preliminary results are available.

Speaking to supporters today, Mr Netanyahu said: "We've all been through a difficult election campaign.

"We are still waiting for the actual results but one thing is clear. The state of Israel is at a historical point, we face great opportunities and great challenges." 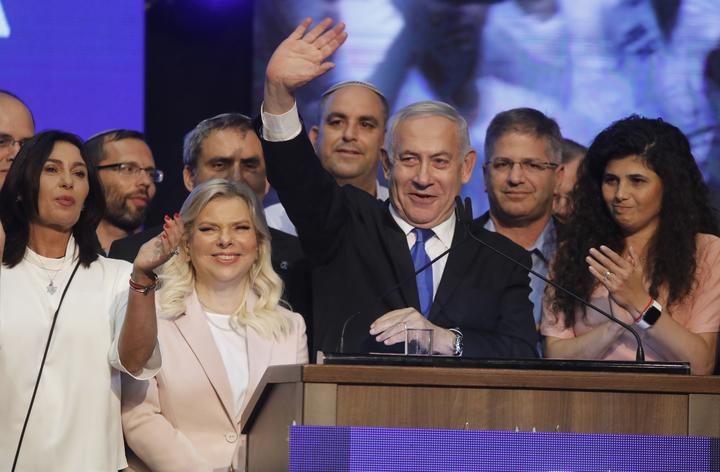 Mr Gantz sounded more optimistic when he spoke to supporters a little earlier.

"Of course we'll wait for the real results, but it seems we have accomplished our mission," he said. "The unity and reconciliation is ahead of us."

A revised exit poll released by Israel's public broadcaster Kan projected that Blue and White would win 32 seats and Likud 31 in the 120-seat Knesset.

In third place was the Israeli Arab Joint List with 13 seats; followed by Mr Lieberman's secular nationalist Yisrael Beitenu party with nine; the ultra-Orthodox Shas and United Torah Judaism parties with nine and eight respectively; the right-wing Yamina party with seven, and the left-wing Labour-Gesher and Democratic Union alliances with six and five respectively.

There was a muted response at Likud's election night headquarters in Tel Aviv as the exit polls were released.

Hundreds of chairs for party supporters remained empty, as activists were kept outside the hall and leaders digested the numbers.

Likud's foreign affairs director noted that Israeli exit polls had got things wrong in the past. Last time, they underestimated the number of votes for Likud and also for some of the religious parties allied to Mr Netanyahu.

"There is no point starting to work out a coalition based on these numbers as they will change," Eli Hazan said.

But Blue and White was "cautiously optimistic" that Israel would get new leadership, spokeswoman Melody Sucharewicz told the Times of Israel.

What could happen next?

The BBC's reporter said that if the polls are correct Mr Netanyahu has no simple route to government. In fact, the figures put him in an even weaker position than after April's election, when coalition talks collapsed, he said.

Mr Gantz could emerge as leader of the largest party, but he could have an even more complex job to form a government.

Mr Lieberman, an ally-turned-rival of the prime minister, could be crucial in deciding who takes office.

He prevented Mr Netanyahu from forming a coalition after the last vote because he refused to back down over a longstanding dispute with religious parties over a bill governing exemptions from military service for ultra-Orthodox young men.

At a rally in Jerusalem on Tuesday night, Mr Lieberman reiterated a call he made during the campaign for unity government.

"We only have one option," he told supporters. "A broad, liberal, national government made up of Yisrael Beiteinu, Likud and Blue and White."

The BBC said such a coalition only seems feasible if Mr Netanyahu were toppled as leader of Likud, as opposition groups have vowed not to sit with him at the helm.

Other possibilities could well play out first, including a third election, complicated by Mr Netanyahu's looming hearing on corruption allegations. The prime minister denies any wrongdoing.

If the official results prove to be inconclusive, it will fall to President Reuven Rivlin to decide who gets the mandate to try to form a government. That person will have 28 days to do so, with a possible extension of not more than 14 days.

A spokesperson for Mr Rivlin said he would hold consultations with party representatives "after he receives a clear picture of the results, and as soon as possible".