Israel's Prime Minister Benjamin Netanyahu is fighting to hold on to power, as voters go to the polls in one of its closest election races in years. 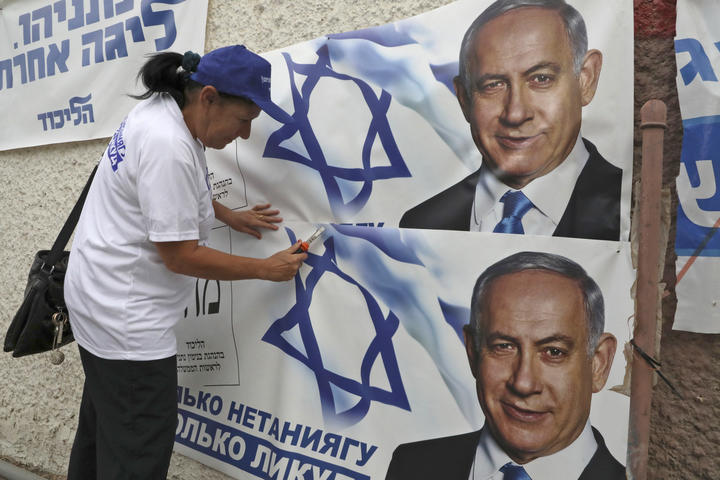 He called the snap election after failing to form a governing coalition in the wake of an election in April.

Smaller parties could therefore have a big say in the final outcome.

Negotiations on the formation of a new coalition are expected to start as soon as voting ends at 10pm local time (7am NZT) and exit polls are published.

Likud and Blue and White came away with 35 seats each in the 120-seat Knesset.

Mr Netanyahu declared victory and it appeared that he would be able to secure a majority with the backing of smaller right-wing and religious parties. But after several chaotic weeks the attempted coalition-building collapsed into recriminations.

On the surface was a dispute over Israel's secular versus its religious character, says the BBC's Tom Bateman in Jerusalem.

But ultimately, our correspondent adds, Mr Netanyahu's problems stemmed from a narrowing range of options to build a governing bloc, weakened as he is by the charges of bribery, fraud and breach of trust he faces in three corruption cases, pending a final hearing.

Mr Netanyahu has denied any wrongdoing. He refuses to rule out seeking parliamentary immunity should he stay in power.

What is Netanyahu's pitch to voters this time?

Throughout the campaign Mr Netanyahu, Israel's longest serving prime minister, has made ever more strident appeals to the right wing as he seeks a record fifth term.

Last week, Mr Netanyahu declared he would "apply Israeli sovereignty" in the Jordan Valley if he won. The announcement amounted to a promise to effectively annex 30 percent of the occupied West Bank, which Palestinians want to be part of a future state.

Amid international condemnation, the Palestinian leadership called the move a war crime which would bury any prospects for peace.

Mr Netanyahu also reiterated a pledge from the last election to annex Jewish settlements in the West Bank. The settlements are considered illegal under international law, though Israel disputes this.

"We find ourselves at the high point of an historic change in the history of the Jewish people and the State of Israel," Mr Netanyahu wrote in the Hebrew-language daily newspaper Maariv on Monday.

"I am asking now for your confidence in order to complete the historic task and fortify the State of Israel's borders and security forever."

What has Benny Gantz promised?

Mr Netanyahu faces an emergent centrist alliance studded with retired generals, who say they will end Israel's increasing divisions. Blue and White was founded in February by Mr Gantz and Yair Lapid, a former finance minister and leader of the Yesh Atid party.

Writing in the Maariv, Mr Gantz said a victory for Blue and White would "change the direction of the ship of state of Israeli democracy".

"No more instigating rifts in an attempt to divide and conquer, but rather quick action to form a unity government," he wrote. "No looking out for the interests of pressure groups, but rather a government that looks out for the majority of Israeli citizens."

It is not clear where Mr Gantz stands on Mr Netanyahu's plan to annex Jewish settlements and the Jordan Valley. He has not said whether or not he accepts the idea of a Palestinian state, although he rejects withdrawing from all of the West Bank.

Why could smaller parties be key?

The final polls suggested no clear route to government for either Mr Netanyahu or Mr Gantz.

A total of 30 parties, with a wide range of policies, are contesting the election, but only a third of them are expected to pass the 3.25 percent threshold for entering parliament.

Avigdor Lieberman, an ally-turned-rival of the prime minister and leader of the right-wing secular Yisrael Beiteinu party, could end up holding the balance of power.

He prevented Mr Netanyahu from forming a coalition after the last election because he refused to back down in a longstanding dispute with religious parties over a bill governing exemptions from military service for ultra-Orthodox young men.

Mr Lieberman has said the only way he will help return Mr Netanyahu to office is if Likud agrees to a secular unity government and shares power with Blue and White - something the prime minister has ruled out.

What happens once the result is known?

President Reuven Rivlin asks the party leader most likely to put together a coalition of more than 60 members of parliament to form a government.

That leader has 28 days to do so, with a possible extension of not more than 14 days. If that attempt to form a government fails, Mr Rivlin can ask the leader of another party to try.

After April's election, Mr Netanyahu's attempts to form a new government failed and he ran out of time in May. He pressed for new elections and Israeli MPs voted by a significant margin in favour of a new poll.