Amber Rudd has quit the cabinet and surrendered the Conservative whip saying she cannot "stand by" while "loyal Conservatives are expelled". 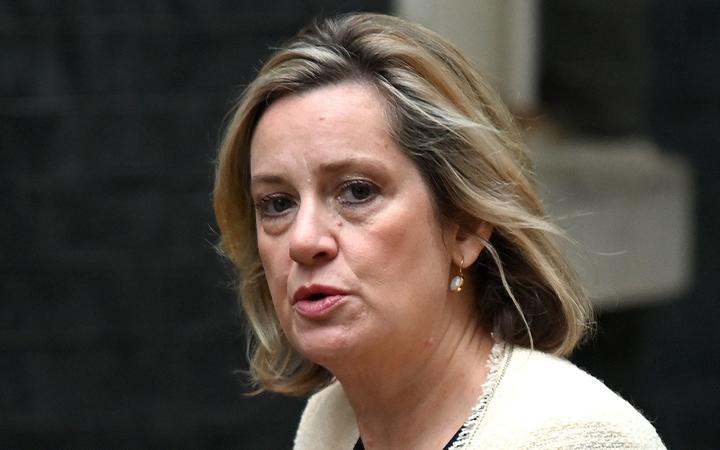 The sacking of 21 MPs has prompted Amber Rudd to step down from Boris Johnson's cabinet. Photo: AFP

The work and pensions secretary said she no longer believed leaving the EU with a deal was the government's "main objective".

Ms Rudd described the sacking of 21 Tory MPs on Tuesday as an "assault on decency and democracy".

No 10 said it was "disappointed" by the resignation of a "talented" minister. But a spokesperson added that "all ministers who joined the Cabinet signed up to leaving the EU on 31 October come what may".

A senior government source said "resignations to chase headlines won't change the fact that people want Brexit done so that government can deliver on domestic priorities".

The MP for Hastings and Rye, who supported Remain in the 2016 referendum, said her resignation had been "a difficult decision".

I have resigned from Cabinet and surrendered the Conservative Whip.

I cannot stand by as good, loyal moderate Conservatives are expelled.

I have spoken to the PM and my Association Chairman to explain.

I remain committed to the One Nation values that drew me into politics. pic.twitter.com/kYmZHbLMES

In her resignation letter to PM Boris Johnson she said: "I joined your cabinet in good faith: accepting that 'No Deal' had to be on the table, because it was the means by which we would have the best chance of achieving a new deal to leave on 31 October.

"However I no longer believe leaving with a deal is the government's main objective."

In an interview with the BBC in January, Ms Rudd said she was committed to avoiding a no-deal Brexit, which she described as "the worst possible outcome".

Exclusive: Amber Rudd @AmberRuddHR today announces that she is resigning from the cabinet and quitting the Conservative Party over Boris Johnson’s “purge” of the party and his “failure” to pursue a deal with the EU.

Labour Party chair Ian Lavery said the resignation was a sign that "no one trusts" Mr Johnson.

"The prime minister has run out of authority in record time and his Brexit plan has been exposed as a sham," he said.

One of the rebel MPs, David Gauke, tweeted that Ms Rudd had been "extraordinarily brave" and her concerns "reflect the views of many of my (former) colleagues".

"One way or another, it is time for them to act," he added.

Fellow rebel Rory Stewart described Ms Rudd as a "true One Nation Conservative", adding: "we must unite to support a Brexit deal and get this done".

Health Secretary Matt Hancock said the Conservative Party had "always been a broad church" and he was "gutted" to see Ms Rudd leave.