The UK government has said a bill to stop a no-deal Brexit will complete its passage through the Lords on Friday. 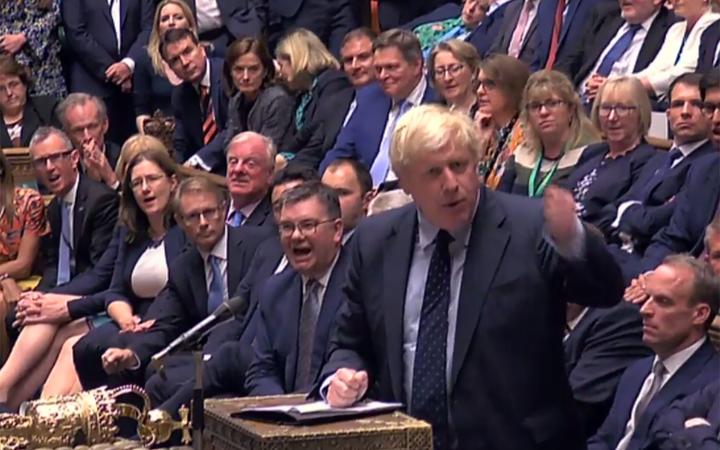 The proposed legislation was passed by MPs on Wednesday, inflicting a defeat on Prime Minister Boris Johnson.

There were fears pro-Brexit peers could deliberately hold up the bill so it could not get royal assent before Parliament is prorogued next week.

Following Wednesday's votes, No 10 said the public would get to choose between a deal, no deal, or "more delay".

Downing Street said the prime minister would deliver an address later setting out the "vital choice that faces our country".

"It is clear the only action is to go back to the people and give them the opportunity to decide what they want: Boris to go to Brussels and get a deal, or leave without one on 31 October or Jeremy Corbyn arriving in Brussels with his surrender bill begging for more delay, more dither and accepting whatever terms Brussels imposes over our nation," the spokesperson said.

Mr Johnson's address comes after the Conservative chief whip in the Lords announced a breakthrough on the bill in the early hours after talks with Labour.

The peers sat until 1.30am (12.30pm NZT), holding a series of amendment votes that appeared to support predictions a marathon filibuster session - designed to derail the bill - was under way.

But then Lord Ashton of Hyde made his announcement that all stages of the bill would be completed in the Lords by 5pm BST on Friday (4am Saturday NZT).

He added that the Commons chief whip had also given a commitment that MPs will consider any Lords amendments on Monday and that the government intends that the "bill will be ready" to be presented for royal assent.

Baroness Smith, Labour leader in the House of Lords, confirmed the opposition supported the move, and said she hoped there would be "no further frustrations" of the bill as it went through all its stages on Friday.

"It has been quite a night. It has been a long debate - and I am grateful to the noble Lords who have stayed the course - it shows the importance of the work we do and the issue we are debating," she said.

"I am grateful that we are now able to confirm that we will be able to complete all stages of the bill in a time-honoured way by 5pm Friday."

The bill to block a no-deal went to the Lords after it passed all its stages in the Commons in one day, backed by opposition MPs and 21 Tory rebels working to push it through ahead of Parliament being suspended next week.

The prime minister was also defeated on Wednesday over his plan to hold a snap general election on 15 October.

Labour and other opposition MPs would not back the move while the option of a no-deal Brexit on 31 October remained open to the PM.

He needed two-thirds of all MPs to vote in favour - under the rules set by the Fixed Terms Parliaments Act - but, after Labour whipped its members to abstain, there were only 298 in favour of the motion and 56 against. That left Mr Johnson 133 short of his target.

Speaking after the vote, the prime minister said Mr Corbyn was "the first leader of the opposition in the democratic history of our country to refuse the invitation to an election".

He said he "urged [Mr Corbyn's] colleagues to reflect on the unsustainability of this position overnight and in the course of the next few days".

But earlier, the Labour leader likened Mr Johnson's offer to "an apple to Snow White from the Wicked Queen... offering the poison of a no-deal".

He added: "Let this bill [to block a no deal] pass and gain royal assent, then we will back an election so we do not crash out."

The government claims that progress has been made in redrafting elements of the Withdrawal Agreement painstakingly negotiated over the past two years.

However, chief European Brexit negotiator Michel Barnier is reported to have told European diplomats that negotiations with London over the terms of Britain's withdrawal from the EU are in a state of paralysis.

He also advised that Britain appeared intent on reducing the level of ambition in the political declaration that will steer the next stage of the negotiations.