The US is set to formally withdraw from a nuclear treaty with Russia, raising fears of a new arms race. 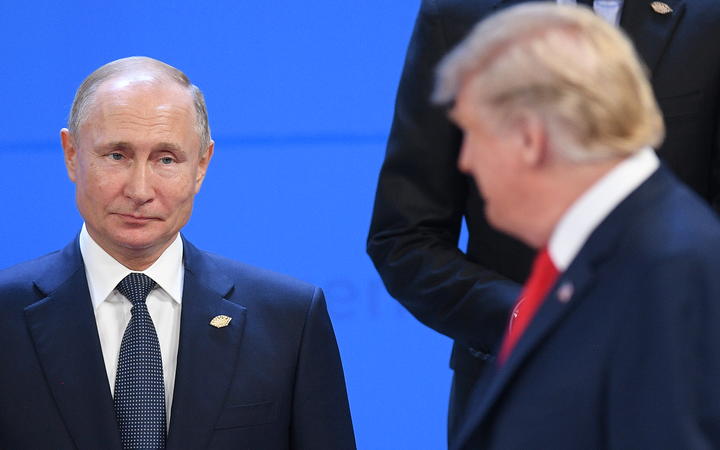 Russian President Vladimir Putin, left, looks at US President Donald Trump before posing for a family photo before the G20 summit in Argentina, 30 November, 2018. Photo: Vladimir Astapkovich / Sputnik via AFP

The Intermediate-Range Nuclear Forces Treaty (INF) was signed by US President Ronald Reagan and Soviet leader Mikhail Gorbachev in 1987.

But earlier this year the US and Nato accused Russia of violating the pact by deploying a new type of cruise missile, which Moscow has denied.

The Americans said they had evidence that Russia had deployed a number of 9M729 missiles - known to Nato as SSC-8. This accusation was then put to Washington's Nato allies, which all backed the US's claim.

President Donald Trump announced in February that the US would withdraw from the pact if Russia didn't come into compliance, and set the deadline for 2 August.

What are the risks?

"This will likely heighten, not reduce, the threat posed by ballistic missiles," he said, urging all parties to "seek agreement on a new common path for international arms control".

Analysts fear that the collapse of the historic agreement could lead to a new arms race between the US, Russia and China.

"Now that the treaty is over, we will see the development and deployment of new weapons," Pavel Felgenhauer, a Russian military analyst, told AFP news agency. "Russia is already ready." 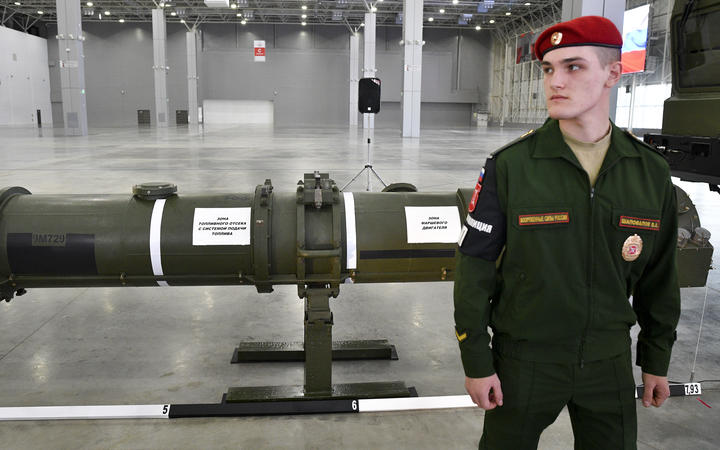 Last month, Nato Secretary General Jens Stoltenberg told the BBC that the Russian missiles - which he said were in "clear violation of the treaty" - were nuclear-capable, mobile, very hard to detect, and could reach European cities within minutes.

"This is serious," he said. "The INF treaty has been a cornerstone in arms control for decades, and now we see the demise of the treaty."

He said there had been "no signs whatsoever" that Russia would comply with the agreement - and that "we have to be prepared for a world without the INF treaty and with more Russian missiles".

Mr Stoltenberg also said that any decision by Nato about how exactly to respond would come after the deadline.

Nato has no plan to deploy land-based nuclear missiles of its own in Europe, he said, but conventional air and missile defence, new exercises and readiness of forces, and new arms control initiatives could all form part of the response.

What is the Intermediate-Range Nuclear Forces (INF) treaty?

Where did things go wrong?

That happened after US President George W Bush, in 2002, pulled the US out of the Anti-Ballistic Missile Treaty, which banned weapons designed to counter ballistic nuclear missiles.

In 2014, then US President Barack Obama accused Russia of breaching the INF Treaty after it allegedly tested a ground-launched cruise missile.

He reportedly chose not to withdraw from the treaty under pressure from European leaders, who said such a move could restart an arms race.

Then last year, Nato supported the US accusations and formally accused Russia of breaking the treaty.

"Allies have concluded that Russia has developed and fielded a missile system, the 9M729, which violates the INF Treaty and poses significant risks to Euro-Atlantic security," a statement from Nato foreign ministers read.

The statement said the member nations "strongly support" the US claim that Russia is in breach of the pact, and called on Moscow to "return urgently to full and verifiable compliance".

Russia denied the accusation and President Putin said it was a pretext for the US to leave the pact.

Amid worsening ties between Washington and Moscow, Turkey last month received the first parts of a Russian S-400 missile defence system despite opposition from the US.

The US has warned that Turkey cannot have both the S-400 anti-aircraft defence system and US F-35 fighter jets.

Turkey and the US are Nato allies but Turkey has also been establishing closer links with Russia.