American President Donald Trump has warned that the US will bolster its nuclear arsenal to put pressure on Russia and China. 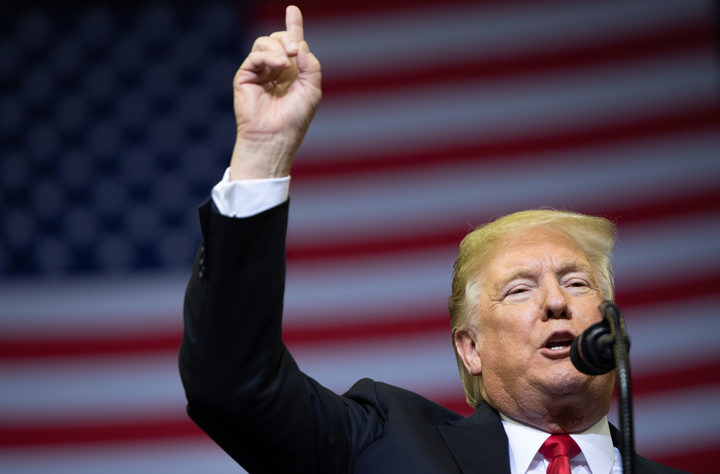 US president Donald Trump says the US will increase its nuclear arsenal "until people come to their senses". Photo: AFP or licensors

Speaking to reporters, Mr Trump repeated his belief that Russia has violated the 1987 Intermediate-Range Nuclear Forces (INF) treaty, which he has threatened to leave. Russia denies this.

Russia has warned it will respond in kind if the US develops more weapons.

Mr Trump said the US would build up its arsenal "until people come to their senses".

Is this back to a nuclear arms race?

"It's a threat to whoever you want to include: China and it includes Russia and it includes anybody else that wants to play that game... [Russia has] not adhered to the spirit of that agreement or to the agreement itself," he said.

Meanwhile, US National Security Adviser John Bolton has been holding talks in Moscow after Russia condemned the US plan to quit the deal.

Mr Bolton was told that the US withdrawal would be a "serious blow" to the non-proliferation regime.

However, Russia's Security Council Secretary Nikolai Patrushev also said the Kremlin was "ready" to work with the US to remove "mutual" grievances over the nuclear weapons treaty.

As Mr Bolton began his visit, Moscow warned it would take steps to maintain the balance of nuclear power.

"We need to hear the American side's explanation on this issue," Kremlin spokesman Dmitry Peskov said. "Scrapping the treaty forces Russia to take steps for its own security."

What does the treaty say?

The INF treaty was signed by US President Ronald Reagan and Mikhail Gorbachev, the last Soviet leader, in the final years of the Cold War.

Mr Gorbachev said a US withdrawal would reverse efforts made to achieve nuclear disarmament.

But the US insists the Russians have, in breach of the deal, developed a new medium-range missile called the Novator 9M729 - known to Nato as the SSC-8 - which would enable Russia to launch a nuclear strike at Nato countries at very short notice.

But Nato said in July that Russia had failed to provide any "credible answer" over the missile and concluded that "the most plausible assessment would be that Russia is in violation of the treaty".

Germany's foreign minister has described Mr Trump's planned withdrawal from the INF as "regrettable", and described the agreement as "hugely important, particularly for us in Europe".

But leaving the INF is also seen as a counter-move to China, which has not signed up to the deal and can therefore develop such weapons at will.

The decision could create uncertainty over the future of other disarmament agreements between the US and Russia, such as the New Strategic Arms Reduction Treaty which ends in February 2021.

The last time the US withdrew from a major arms treaty was in 2002, when President George W Bush pulled the US out of the Anti-Ballistic Missile Treaty, which banned weapons designed to counter ballistic nuclear missiles.