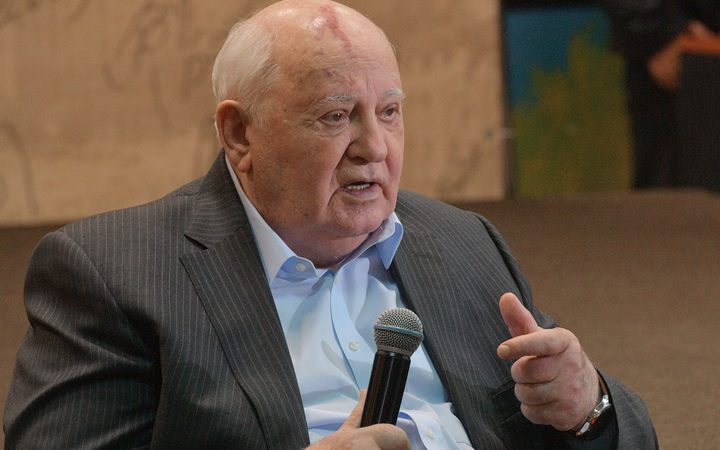 Mr Gorbachev, who signed the Intermediate-Range Nuclear Forces (INF) treaty with President Reagan in 1987, has been quoted by the Interfax news agency as questioning the plan.

"Under no circumstances should we tear up old disarmament agreements. ... Do they really not understand in Washington what this could lead to?," the news agency quoted Gorbachev as saying.

"Quitting the INF is a mistake."

Mr Trump said Russia had been "violating [the INF] for many years".

Russia has condemned the plans and threatened to retaliate.

The Kremlin said President Vladimir Putin would be seeking an explanation from visiting US National Security Adviser John Bolton.

Germany was the first US ally to criticise the move, with Foreign Minister Heiko Maas urging Washington to consider the consequences both for Europe and for future disarmament efforts.

The INF banned ground-launched medium-range missiles, with a range of between 500 and 5,500km.

It was signed near the end of the Cold War, a period of relations between the US and the Soviet Union from 1945 to 1989 marked by intense international tension and overshadowed by the threat of nuclear conflict.

In the past five decades, the US and Russia have signed a range of joint agreements to limit and reduce their substantial nuclear arsenals.

He resigned as Soviet president in 1991 after Soviet republics declared independence.

What exactly has Trump said?

President Trump said the US would not let Russia "go out and do weapons [while] we're not allowed to".

"I don't know why President [Barack] Obama didn't negotiate or pull out," the president said of the INF treaty after a campaign rally in Nevada.

In 2014, President Obama accused Russia of breaching the INF after it allegedly tested a ground-launched cruise missile. He reportedly chose not to withdraw from the treaty under pressure from European leaders, who said such a move could restart an arms race.

How has Russia responded?

"This would be a very dangerous step that, I'm sure, not only will not be comprehended by the international community but will provoke serious condemnation," Russia's Deputy Foreign Minister Sergei Ryabkov said.

The treaty is "significant for international security and security in the sphere of nuclear arms, for the maintenance of strategic stability," he told state news agency Tass.

The minister also told the news agency RIA Novosti that if the US continued to behave "clumsily and crudely" and backed out of international agreements, "then we will have no choice but to undertake retaliatory measures, including involving military technology".

"But we would not want to get to this stage," he added.