Hong Kong's opposition Democratic Party is investigating attacks on train passengers in which up to 45 people were injured. 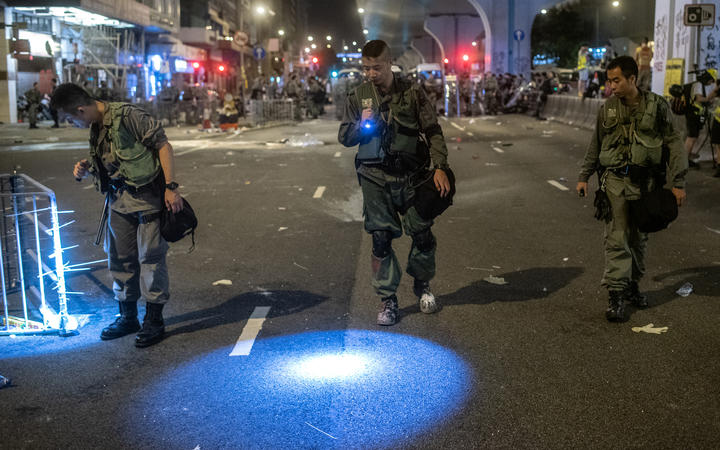 Police officers searching for evidence after clashes with protesters following a march against a controversial extradition bill in Hong Kong early. Photo: AFP

Footage taken by commuters shows unidentified men in white T-shirts, and some armed with poles, flooding into a station and attacking passengers.

Some passengers had been at an earlier anti-government march and there are fears the Chinese government may be behind the attacks.

As one of her final acts of office, the British Prime Minister Theresa May will chair the government's emergency committee Cobra to discuss the crisis sparked by Iran's seizing of a British-flagged tanker in the Strait of Hormuz. 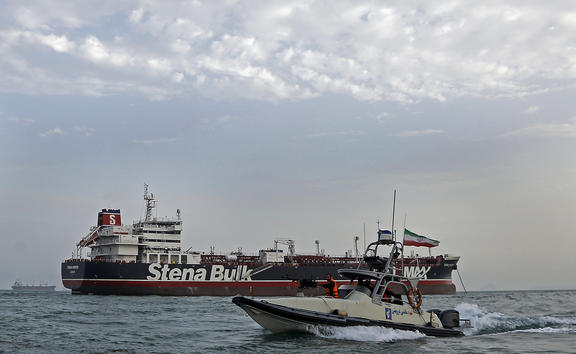 Iran has the Stena Impero under guard in the port of Bandar Abbas where it's now flying an Iranian flag.

Iran says it was involved in a collision with a fishing boat but it's widely believed it's been seized in retaliation for Britain's seizure of an Iranian tanker off the coast of Gibraltar earlier this month, over accusations it was violating sanctions on Syria.

Two teenagers are in hospital with critical stab wounds and at least five others were injured after rioting at a juvenile detention centre in central New South Wales.

Young detainees armed themselves with makeshift weapons at the centre in Kariong near Gosford.

A group of about 20 climbed up onto the roof of the facility and have been involved in a stand-off with the police.

Hundreds of firefighters are battling wildfires in a forested, mountainous area of central Portugal. 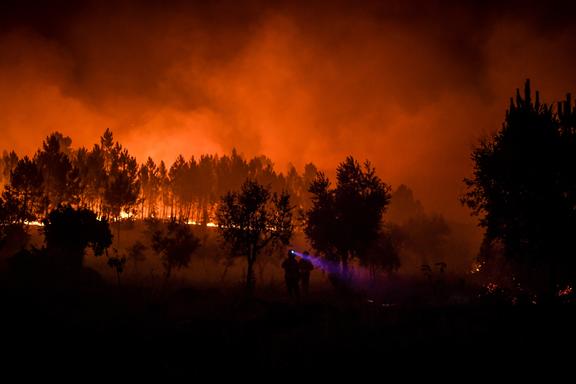 Firefighters are at work to extinguish a wildfire in Cardigos village in Macao, central Portugal. Photo: Photo / AFP

Eight firefighters and 12 civilians have been injured in the Castelo Branco region.

The largest operation involves 800 firefighters, 245 vehicles including bulldozers, along with 13 planes and helicopters in the municipality of Vila de Rei. 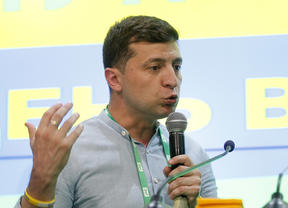 Exit polls suggest the Servant of the People party will have a majority in parliament - but will need a coalition partner to form a government.

Mr Zelensky, who's a former comedian with no political experience, triumphed in April's presidential poll, but has been unable to appoint the ministers he wants.

He has pledged to implement radical reforms and tackle rampant corruption.

Japanese Prime Minister Shinzo Abe has called for debate on revising the post-war, pacifist constitution, saying the result of an upper house election shows it was what voters sought.

Mr Abe's Liberal Democratic Party-led coalition won a solid majority, but fell short of the two-thirds "super majority" needed to begin the controversial process of amending the constitution which hasn't been changed since it was adopted after Japan's World War II defeat.

Mr Abe has long sought to revise the constitution's pacifist Article 9 to further legitimise the military, but public opinion is divided

Puerto Rico's governor will not seek re-election, but has refused to resign as the island braces for more protests by demonstrators demanding he step down over leaked, sexist and homophobic chat messages.

A day before a planned general strike and massive street demonstrations in the bankrupt US territory, Ricardo Rossello said he respected the wishes of Puerto Ricans and would not seek a second term in November 2020 elections. 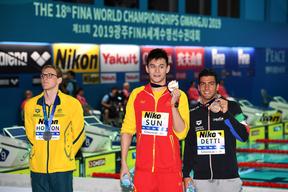 Horton finished second behind Sun in the 400m freestyle final at the World Championships in South Korea.

Sun, who previously served a doping sanction in 2014 was labelled a "drug cheat" by Horton before the Rio Olympics and is currently facing doping rule violations which could see him banned from next year's Tokyo Olympics.