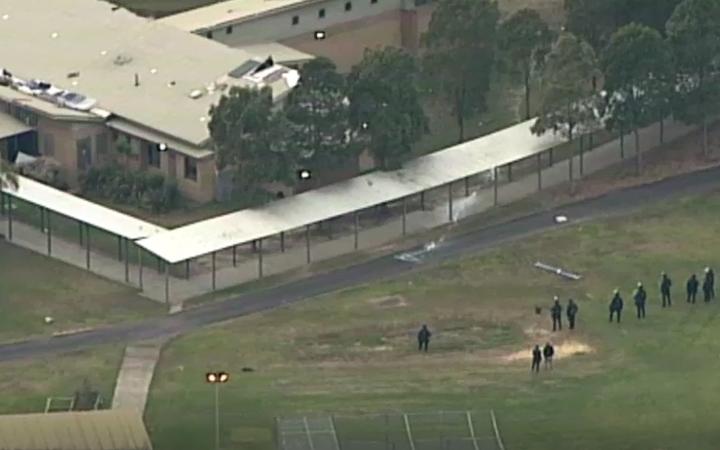 Police in the process of resolving an ongoing riot at a juvenile detention centre in Kariong. Photo: ABC News / Fair Use

Police responded to reports of a violent assault at the Frank Baxter Juvenile Justice Centre in Kariong, New South Wales, about 8.30pm yesterday.

During the chaos, seven teenagers were injured.

An 18-year-old sustained stab wounds and facial injuries and was taken to Sydney's Royal North Shore Hospital in a serious condition.

Another teenager, also 18, received stab wounds to his head and hands.

A 17-year-old dislocated his ankle after jumping off a roof.

Another four people were taken to Gosford Hospital with injuries including a broken nose, broken bones and bruising.

Riot police and 15 ambulance crews were called to the scene when the riot broke out - a perimeter has been established and specialist officers remain on the scene.

Several young men were seen on the roof of one of the centre's buildings holding shovels and gardening tools this morning. They had spent the night on the roof and this morning they could be seen exposing themselves to police and media at the scene.

One of them held tennis balls and a tennis racquet and was lobbing shots at police and onto the rooftops of other buildings.

Down below, dozens of riot police were approaching the building carrying ladders.

General secretary Stewart Little of the Public Service Association, which represents workers at the centre, said more than 30 inmates had taken control of the centre before they began hunting after known sex offenders.

"They have set about, as we understand, with the intent to either murder those offenders or do very serious harm to them," he said.

Mr Little said the facility had a mixed population of offenders with a history of violence, terrorism and "horrific sex crimes".

He called on the state government to stop "dragging their heels" and introduce segregated facilities.

"A number of inmates had armed themselves with makeshift weapons and have gone about assaulting other inmates within the centre," he said.

Superintendent Joice said the riot was "rather unique" because of the prisoners who had isolated themselves inside a building after the assault.

The ABC understands a group of prisoners also cornered a guard and took their keys to open a shed, where items such as chainsaws and pickaxes were stored.

The group then used the keys they took to release other inmates from their cells.

The Department of Youth Justice said negotiations were ongoing.