An Air Force investigation has found no evidence to support accusations of sexual misconduct against President Donald Trump's nominee to become vice chairman of the Joint Chiefs of Staff, a senior US military official said on Wednesday. 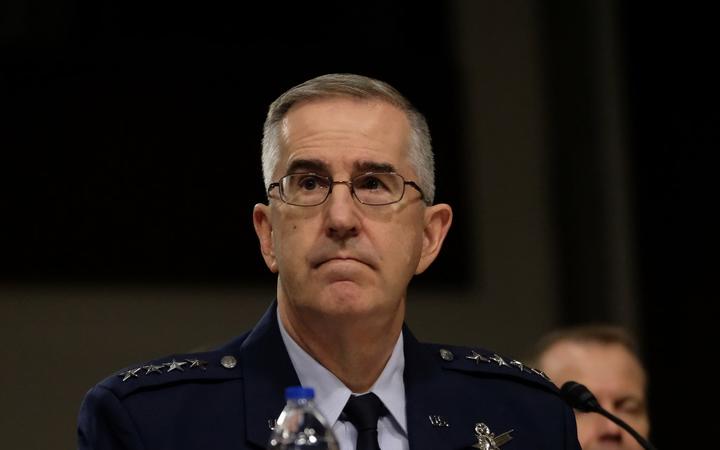 The nomination of Air Force General John Hyten, the outgoing head of the US military's Strategic Command, remains on track, the Pentagon said. Still, it was unclear if he would be confirmed by the Senate by the end of July, when outgoing Vice Chairman Paul Selva is due to retire.

"We've conducted an exhaustive investigation, talked to ... 53 witnesses across three countries and 13 states, reviewed tens of thousands of emails, interviewed folks that were closest to the alleged incidents," the military official said, speaking on condition of anonymity.

"We're just out of rocks to turn over."

The unsubstantiated allegations against Gen Hyten included "unwanted kissing, touching, rubbing up against" the accuser, the official said.

News of the investigation follows a spate of surprise disclosures at the Pentagon, including ones that led Patrick Shanahan to resign as acting defence secretary last month and led the admiral expected to become the Navy's next top uniformed officer to instead announce on Sunday that he would retire.

Sources said the outcome of the investigation into the allegations against Gen Hyten has been briefed to the Senate, which has yet to schedule a confirmation hearing. Gen Hyten is likely to be asked about them in any testimony.

The Senate is due to consider other several key nominations, including to confirm acting U.S. Defense Secretary Mark Esper in the job. On Thursday, it will hold a confirmation hearing for Army Chief of Staff Mark Milley to become the next chairman of the Joint Chiefs of Staff, Trump's top uniformed military adviser.

The U.S. military official, briefing a small group of reporters, said an unidentified U.S. military service member brought allegations of nine incidents between 2017 and 2018 against Hyten just days after Trump nominated him in April to become the nation's second-highest uniformed military officer.

The official said that as required by law, the Air Force opened a criminal probe led by the Air Force Office of Special Investigations into the allegations on 15 April.

Following the investigation, the office's report was referred to a body overseen by another four-star general to determine whether there should be any further action, including a military court martial.

"The court martial convening authority considered the facts in the report, and based on advice of their counsel, decided that there was insufficient evidence to prefer any charges against General Hyten or to recommend administrative actions against the general," the official said.

Air Force Colonel DeDe Halfhill, a senior Pentagon spokeswoman, said Gen Hyten cooperated with the investigation, and noted his decades of service in a statement.