At least 40 people have been killed by an air strike that hit a migrant detention centre in Libya, officials say. 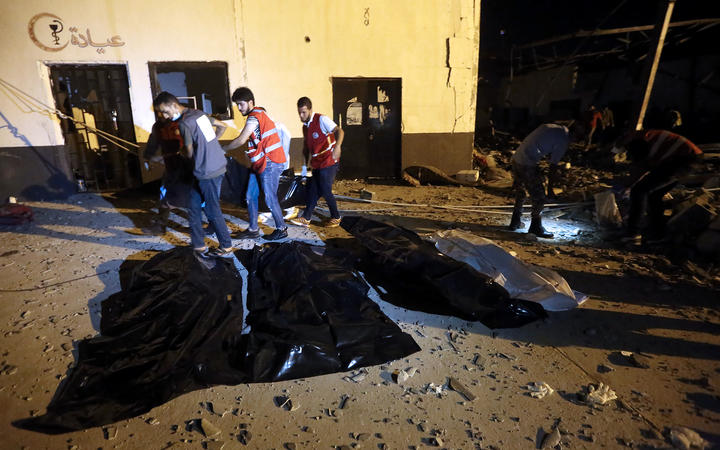 Another 80 are reported to have been wounded in the explosion, which happened at a facility in an eastern suburb of the capital, Tripoli.

The majority of those killed are reported to be African migrants.

In recent years, Libya has been a key springboard for migrants seeking to travel to Europe.

The country has been torn by violence and division since long-time ruler Muammar Gaddafi was deposed and killed in 2011.

Osama Ali, a spokesman for the emergency services, told AFP that 120 migrants had been in a hangar which was directly hit by the strike in Tajoura.

He added that more people may have been killed because the death toll so far was "a preliminary assessment".

The UN-backed Government of National Accord (GNA), which is led by Prime Minister Fayez al-Serra, has blamed the self-styled Libyan National Army (LNA) for Wednesday's strike.

The LNA - led by strongman Khalifa Haftar - has been fighting forces loyal to the country's internationally recognised government in the area where the strike happened.

It had announced on Monday that it would start heavy air strikes on targets in Tripoli after "traditional means" of war had been exhausted.

But a spokesperson for the LNA denied that its forces had hit the detention centre.

Thousands of migrants attempting to travel to Europe are held in government-run detention centres - such as this one - which are often located close to the frontlines of the country's conflict.

The poor conditions of these centres have been criticised by human rights groups.

The European Union has stepped up cooperation with the Libyan coastguard to intercept migrant boats.

But people-smuggling gangs have flourished in the country's political chaos, charging desperate migrants thousands of dollars per head.