Fresh fighting has flared near the Libyan capital, Tripoli, between pro-government forces and rebel fighters from the east of the country. 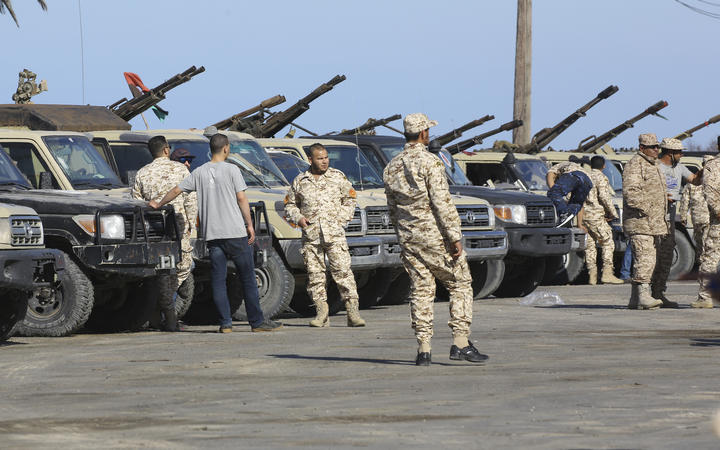 Reports say clashes between General Khalifa Haftar's rebels and pro-government groups are taking place in three suburbs to the south of the city.

Tripoli is the base of the UN-backed, internationally recognised government.

The UN's Libya envoy has insisted that a planned conference on possible new elections will still go ahead.

In a televised address the head of the UN-backed government, Prime Minister Fayez al-Sarraj, accused General Haftar of launching a coup.

Mr al-Sarraj said his government had "extended our hands towards peace", but said General Haftar will now be met with "nothing but strength and firmness".

The offensive by the LNA intensifies a power struggle that has fractured the oil-producing country since the 2011 overthrow of Muammar Gaddafi.

UN troops in the capital have been placed on high alert.

What's happening on the ground?

General Haftar - who was appointed chief of the Libyan National Army (LNA) under an earlier UN-backed administration - ordered his forces to advance on Tripoli on Thursday, as UN Secretary General Antonio Guterres was in the city to discuss the ongoing crisis.

The Libyan air force, which is nominally under government control, targeted an area 50km south of the capital on Saturday morning.

General Haftar spoke to Mr Guterres in Benghazi on Friday, and reportedly told him that his operation would not stop until his troops had defeated "terrorism".

Tripoli residents have begun stocking up on food and fuel, AFP reported.

LNA troops seized the south of Libya and its oil fields earlier this year.

The G7 group of major industrial nations has urged all parties "to immediately halt all military activity". The UN Security Council has issued a similar call.

Russia has also called on parties in the escalating conflict to find an agreement.

Speaking in Egypt, Russian foreign minister Sergei Lavrov warned against what he called foreign meddling in Libya, while Egypt's foreign minister Sameh Shoukry said Libya's problems could not be solved by military means.

Both countries have provided support to General Haftar.

UN envoy Ghassan Salame said that the conference planned for 14-16 April would still be held in time, despite the escalation - "unless compelling circumstances force us not to".

Who is Khalifa Haftar?

Born in 1943, the former army officer helped Colonel Muammar Gaddafi seize power in 1969 before falling out with him and going into exile in the US. He returned in 2011 after the uprising against Gaddafi began and became a rebel commander.

In December, General Haftar met Prime Minister Fayez al-Serraj from the UN-backed government at a conference but refused to attend official talks.