Migrants and asylum seekers crossing the Mediterranean now face an even deadlier journey then they have in the past, the UN refugee agency has warned. 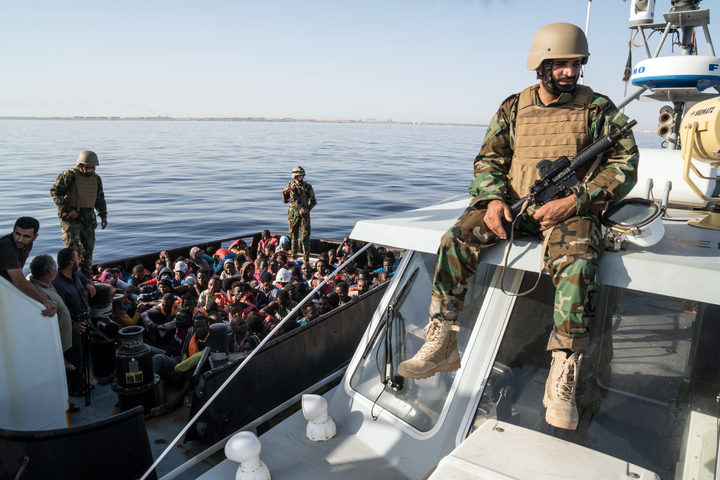 A Libyan coastguard watches over illegal immigrants who attempted to reach Europe after launching off the coastal Libyan town of Zawiyah last year. Photo: AFP

In a report, the agency says that while the number of people arriving in Europe has fallen significantly, the number of deaths has risen sharply.

Traffickers are having to take greater risks as there is more surveillance from the Libyan coastguard, it says.

More than 1600 people have died trying to reach Europe so far this year.

Seven of those incidents have been since June alone, the United Nations High Commissioner for Refugees (UNHCR) said.

As the number of those trying to cross falls, Europe should focus less on managing numbers and instead on saving lives, the agency says in its report.

On the central Mediterranean route (from northern Africa to southern Europe) so far this year, there have been 10 separate incidents in which 50 or more people died - most after departing from Libya.

Libya's coastguard intercepts more and more boats carrying migrants, increasing the likelihood that those on board may die during the Mediterranean journeys, the UN refugee agency says.

"The reason the traffic has become more deadly is that the traffickers are taking more risk, because there is more surveillance exercised by the Libyan coastguards," said Vincent Cochetel, UNHCR's special envoy for the central Mediterranean.

"They are trying to cut the costs: it costs them more to keep those people here longer in their warehouses, under captivity."

Matt Saltmarsh from the agency said much more needed to be done.

"We are calling for the European authorities in particular to come up with a co-ordinated strategy whereby boats can be systematically disembarked in different parts of Europe and where asylum claiming conditions and reception centres are in place ready to receive those people who arrive," he told the BBC.

The EU has stepped up co-operation with the Libyan coastguard to intercept migrant boats. But people-smuggling gangs have flourished in Libya's chaos, charging desperate migrants thousands of dollars per head.

The EU Commission has proposed "regional disembarkation platforms" in North Africa, where the UN and other agencies could screen those who have a genuine claim to asylum in Europe. Those not eligible would be offered help to resettle in their home countries.

But processing centres outside the EU must not become a "Guantanamo Bay" for migrants, EU migration commissioner Dimitris Avramopoulos warned.