The coroner at the London Bridge inquests said he was "not convinced" MI5 and police missed any opportunities that would have prevented the attack. 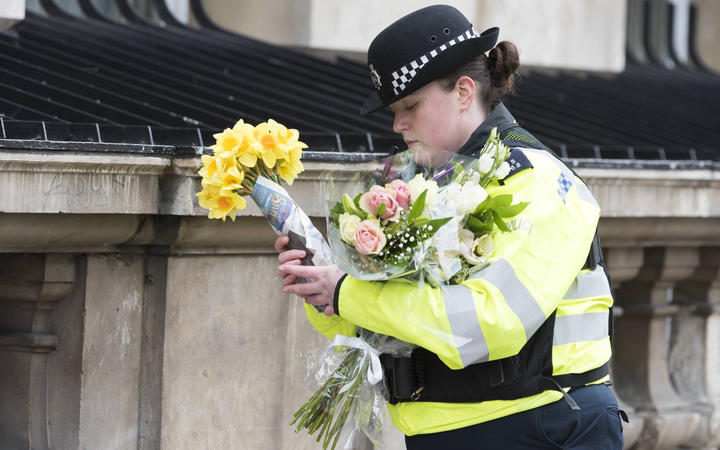 A police officer with flowers the day after the terror attack in the heart of London, Westminster. Photo: AFP

The inquests into the deaths of the eight victims ended with chief coroner of England and Wales Mark Lucraft concluding they were unlawfully killed.

He said he would not be criticising MI5 and the police in his conclusions.

But Mr Lucraft did criticise the lack of barriers on the bridge - a "particularly vulnerable" location.

The attack, in June 2017, happened only two and half months after the Westminster Bridge attack.

Mr Lucraft said the lack of barriers showed "weaknesses in systems for assessing the need for such measures... and implementing them promptly".

But some victims' friends and families remain critical of the police. 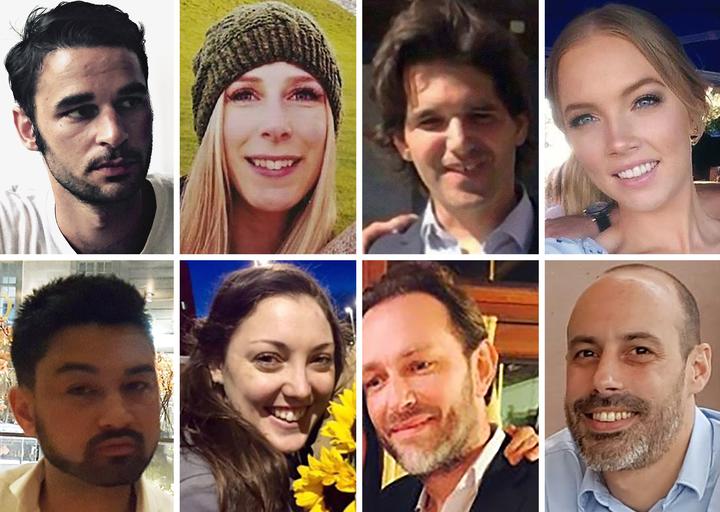 The victims were at the top from left: Alexandre Pigeard of France, Christine Archibald of Canada, Ignacio Echevarria of Spain, Sara Zelenak of Australia. At the bottom from left: James McMullen of Britain, Kirsty Boden of Australia, Xavier Thomas of France, and Sebastien Belanger of France. Photo: AFP

Philippe Pigeard, whose 26-year-old son Alexandre Pigeard was killed, also pointed to the lack of barriers, saying: "I think this attack could have been prevented."

Speaking after the inquest concluded, he said there were "a lot of missed opportunities" to neutralise at least one of the attackers who was known to be dangerous.

Christine Delcros, who was severely injured and lost her boyfriend, Xavier Thomas, in the attack highlighted a "catalogue of failings".

Ms Delros said it was "staggering" that Khuram Butt, a "well known extremist", was allowed to work within the London Transport network, and that "opportunities to identify all the attackers and disrupt their activities did not occur".

Ms Kennett, who was out to celebrate her birthday, was stabbed in the neck as she tried to help.

Standing next to Ms Kennett outside court, Mr Pigeard said: "I want to thank so much Helen for her courage.

"She came to help my son who was bleeding to death. She was stabbed too in a few seconds."

Citing the coroner's findings, Mr Basu said: "Even those closest to the attackers, and we have heard from them during the inquest, knew nothing of their murderous plans."

He said it will "never be possible to stop every plot".

Summing up evidence earlier, the coroner had said the family of attacker Khuram Butt were not "convincing witnesses" in court.

He said each of Butt's family members "accepted that they should now have done more at the time" and that they all "knew something of his extreme views".

Mr Lucraft said he could understand the pressures on Saad Butt - whose daughter had been killed in an accident.

But he said: "It seems to me that on the basis of what he accepted he did know of his brother and the worrying views he was espousing, he did very little, if anything, to accurately monitor his brother's movements."

Earlier in the inquest Butt's widow, Ms Rehman, told the court his actions were "disgusting" and their children would never know where his grave was.

She said she would not grieve for his death and also denied prior knowledge of her husband's plot - although she said she had been worried he wanted to go to Syria.

'Anger in their eyes'

The coroner praised police officers, medics and members of the public who rushed to help on the night of the attack despite the danger.

PC Charlie Guenigault, 27, was off duty when he took on the three attackers alongside British Transport Police PC Wayne Marques and Spanish banker Ignacio Echeverria.

He said: "In my head I just see all three of them standing in front of me, knives in hand and fake vests on and that look of, 'We're going to kill you,' basically that sort of anger in their eyes."

PC Guenigault, who was awarded the George Medal, said he "played dead" after being stabbed in the head.

Ringleader Butt, 27, alongside Rachid Redouane, 30, and Youssef Zaghba, 22, drove a van into pedestrians on London Bridge before getting out and stabbing people in and around Borough Market.

The three attackers were shot dead by police less than 10 minutes after the rampage began.