A man has died and eight people have been injured after a van struck a crowd of pedestrians near a north London mosque. 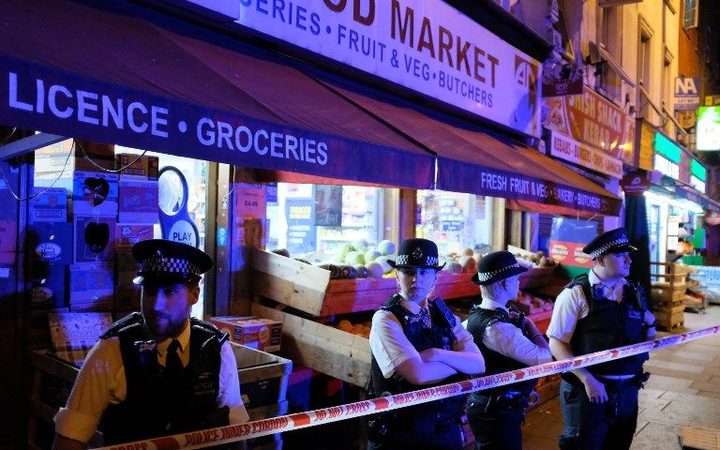 Police cordon off a street in the Finsbury Park area of north London after a van hit pedestrians. Photo: AFP

Police said the injured had been taken to three separate hospitals and two people were treated at the scene for minor injuries.

A 48-year-old man was arrested following the incident on Seven Sisters Road, which runs through the Finsbury Park area of the city.

British Prime Minister Theresa May said police had confirmed the incident was being treated as a "potential terrorist attack".

She described it as a "terrible incident", adding: "All my thoughts are with those who have been injured, their loved ones and the emergency services on the scene."

He has also asked people to "remain calm and vigilant".

He said: "We don't yet know the full details, but this was clearly a deliberate attack on innocent Londoners, many of whom were finishing prayers during the holy month of Ramadan.

"While this appears to be an attack on a particular community, like the terrible attacks in Manchester, Westminster and London Bridge it is also an assault on all our shared values of tolerance, freedom and respect."

Police said the van driver would also be subject to a mental health assessment in due course.

It happened just after midnight London time and armed police officers remain at the scene, the Metropolitan Police said, describing it as a "major incident".

The Muslim Council of Britain said its "prayers are with the victims."

"It appears that a white man in a van intentionally ploughed into a group of worshippers who were already tending to someone who had been taken ill," the Muslim Council said in a statement.

It said the incident was the most violent manifestation of islamophobia in Britain in recent months and called for extra security at places of worship as the end of the holy month of Ramadan nears.

One eyewitness who lives in a flat on Seven Sisters Road told the BBC she saw people "shouting and screaming".

"Everyone was shouting 'a van's hit people'.

"There was this white van stopped outside Finsbury Park Mosque that seems to have hit people who were coming out of the mosque after prayers finished."

She said the road was "backed up" with police cars, ambulance and fire engines.

Others have described seeing police tend to the injured.

Cynthia Vanzella said on Twitter: "Horrible to watch police officers doing cardiac massage at people on the floor, desperately trying to save them. I just hope they did."