The remains of an old bridge in the northern Italian city of Genoa that dramatically collapsed killing 43 people have been blown up in six seconds of controlled explosions. 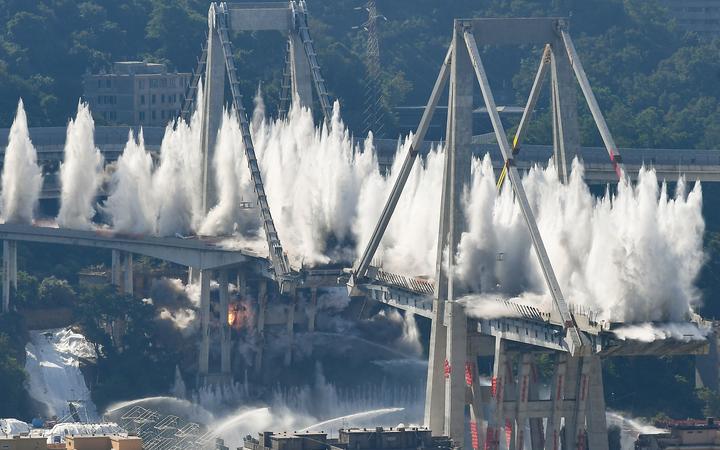 The demolition clears the way for the building of a new structure.

Engineers used about 550 kilograms of explosive to tear down two towers of the Morandi bridge today, as cannons shot water over the 36,000 tonnes of steel and concrete to prevent huge clouds of dust engulfing the city.

More than 3400 people were evacuated from houses within a radius of 300 metres and taken to accommodation centres. Residents will be able to return to their homes only after the dust raised by the explosion has finally settled on the ground and after an assessment of the air's quality by environment agencies.

Genoa mayor Marco Bucci announced after the blasts that everything had gone according to plan, although checks would be made during the day. 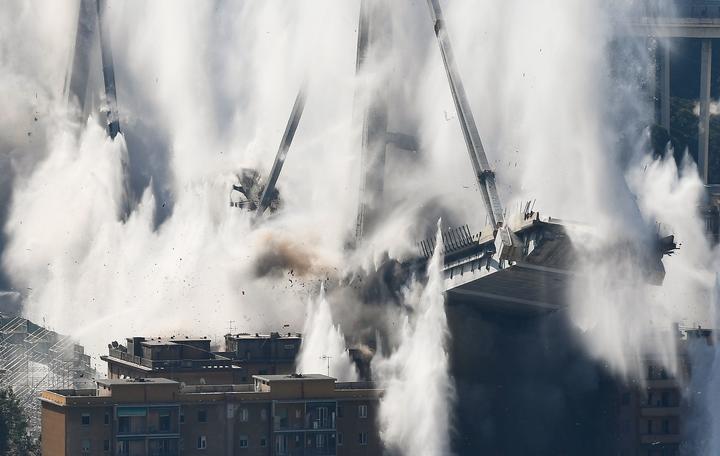 The bridge's deck collapses in a cloud of smoke and water after explosive charges were set off. Photo: AFP

The demolition of the Morandi bridge, which gave way on 14 August last year, sending dozens of vehicles plunging 50 metres to the ground below, began in February.

Access to Genoa's busy port has been more difficult since the bridge collapsed, which has also caused a lengthy detour for drivers wanting to head to southern France.

The national government of the anti-establishment 5-Star Movement (M5S) and the right-wing League wants its rapid reconstruction, hoping to signal a departure from the corruption and inefficiency that have often plagued Italian infrastructure projects.

A new bridge designed by the renowned Genoa-born architect Renzo Piano would be inaugurated by the middle of next year, the government has promised. 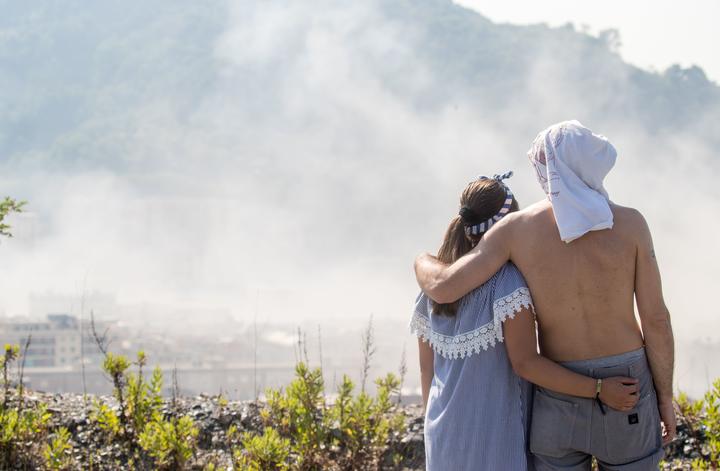 A couple watches the demolition of some of the pylons. Photo: AFP

Following the tragedy, it emerged that the steel rods suspending the 1.2km bridge had been slowly decaying over decades and were badly damaged by the sea air.

The degradation may have also been compounded by heavy traffic on the bridge, over which about 25 million vehicles passed every year.

It remains unclear whether the government will keep its promise to revoke the concession of toll road operator Autostrade per l'Italia, a unit of infrastructure group Atlantia which was in charge of the bridge's maintenance.

The government has accused Autostrade of serious failings in its upkeep of the bridge.

M5S is determined to push ahead but the League is dragging its feet, partly due to concerns over compensation costs and partly because Atlantia is now seen as a potential investor in ailing flagship airline Alitalia. 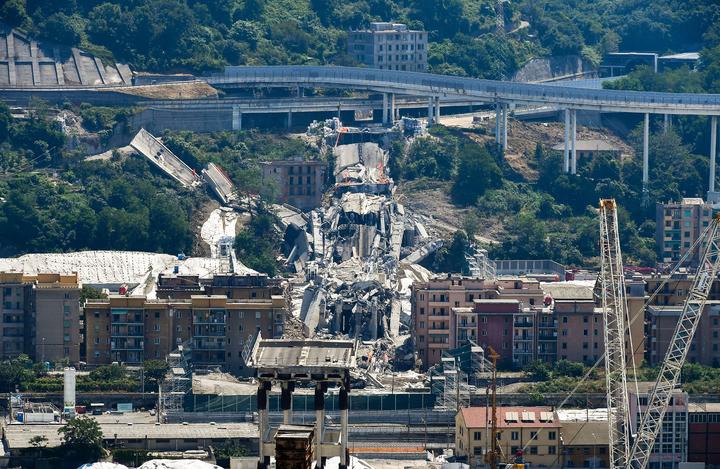 Debris and rubble at the site after the explosive charges were set off to bring down Genoa's Morandi motorway bridge. Photo: AFP