Russia has begun releasing a group of almost 100 captive whales into the wild after an international outcry, state TV said on Thursday. 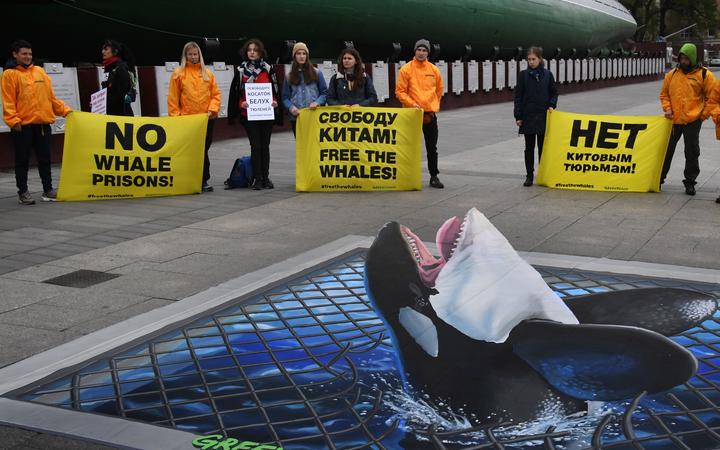 A protest in Vladivostok over more than 100 whales and orcas being held captive in Russia's Far East. Photo: Vitaliy Ankov / Sputnik/ AFP

The whales had been detained in Russia's Far East since last year.

Six beluga and two killer whales were being transported on Thursday, part of a four-month operation to return all of the orcas to their natural habitat, a report aired during President Vladimir Putin's televised annual question and answer session said.

The plight of the whales, which were held in cramped conditions and were meant to be sold commercially, has captured imaginations around the world.

Celebrities including actor Leonardo DiCaprio have petitioned for their release.

The Kremlin ordered local authorities in the Russian Far East to intervene months ago, but the problem of how to release them without causing them harm caused delays.

The beginning of their release coincided with Mr Putin's annual Q&A session, an event he uses to burnish his reputation and which took on new significance this year with his slipping popularity ratings.

One of the presenters asking Mr Putin questions suggested that the Russian leader had been responsible for bringing about their release, while another state TV reporter referred to what she called the miracle-working effect of Mr Putin's annual show.

In a segment dedicated to the plight of the mammals, Deputy Prime Minister Alexei Gordeyev said that the orcas would be taken back to where they were caught, something campaigners had insisted upon, and released within four months in small groups.

"We have taken the only sensible decision at the recommendation of scientists to rebase the animals to their natural habitat where they were caught, to their familiar environment," the minister said.

The whales were caught by four Russian companies last summer in the Sea of Okhotsk and were meant to be sold to marine parks or aquariums in China, before the law changed outlawing such exports.

The Kremlin has said Russia has no direct ban on catching whales, but that they can only legally be caught in specific circumstances, for scientific and educational purposes.