A woman killed by a lightning strike while hillwalking in Scotland died as a result of a "freak accident", a mountain rescue team member says. 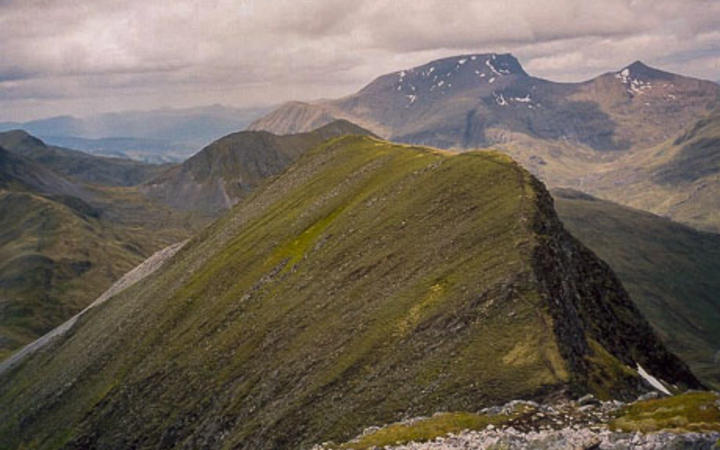 The woman who died was with a group of walkers on Na Gruagaichean in the Scottish Highlands. Photo: Supplied

Isobel Bytautas, 55, from Selkirk, was among a group of seven walkers who were on Na Gruagaichean, near Ben Nevis, on Saturday when the lightning struck.

The Linlithgow Ramblers party, including another woman who was also hit, were airlifted to Fort William.

Read more: What does it feel like to be struck by lightning?

Andy Nelson, from Glencoe Mountain Rescue team, said it was very rare for someone to be hit on a hill.

"I know there have been incidents around Lochaber at sea level but it's very, very rare and the first time I've experienced one being involved with a direct hit with lightning on a hill," he said.

"We're quite used to seeing nasty accidents but this was very unusual. I would say it was a freak accident."

'No hint of thunder and lightning' in weather forecast

Mr Nelson said he had been on the hill climbing with his family earlier the same day.

"The forecast mentioned that there was rain in the afternoon but no hint of thunder and lightning so it was a completely reasonable expedition for the group to undertake," he said.

"But if people do see or hear electrical activity coming towards them then descending immediately from any high ground as soon as is practicable and safe is definitely the best option."

Tompion Platt, who is a member of the Linlithgow Ramblers, paid tribute to Ms Bytautas.

"We are all deeply shocked to hear this tragic news," he said.

"Our thoughts and sincerest condolences are with Isobel's family and friends - and with those of the other injured walker and Linlithgow group - today.

"Our focus now is on supporting those involved in any way we can."

The injured woman is in a stable condition in Belford Hospital, Fort William.

Police inspector Isla Campbell said: "We are grateful for the prompt and professional response from partner agencies to this tragic incident and offer our condolences to the lady's family."