A fire has engulfed a block of flats in east London, forcing people to evacuate their homes as it spread over six floors. 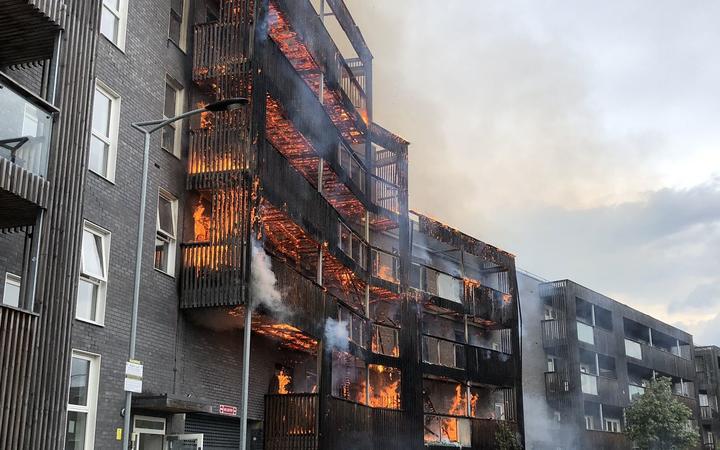 The blaze took hold from the ground floor to the sixth floor of the flats in De Pass Gardens, Barking, at about 3.30pm (UK time), forcing residents to evacuate.

About 100 firefighters worked for more than two hours to subdue the fire, which is now extinguished. The cause is being investigated.

Two people have been taken to hospital with minor injuries.

Nearby flats have also been evacuated and the Met has put road closures in place.

Resident Mihaela Gheorghe said she had "raised several issues" about the safety of wooden balconies on the blocks of flats.

She added: "I was in my fourth-floor flat when the fire started. We ran out. The fire brigade came but they found it hard to find a water supply at first.

"We said that one day a fire is going to happen.

"We raised several issues to the builder, the maintenance companies and the council about the safety of having all these wooden balconies."

Residents who have been affected by the fire have been told to "take rest" at the Thames View Community Centre - about 2km away from the scene.

Pictures on social media showed part of the building engulfed in flames and smoke billowing into the air.

Crews from Barking, Dagenham East Ham and other surrounding fire stations are at the scene.

Crews are continuing to tackle the fire at a block of flats in #Barking. Residents who are affected by the fire are advised to go to the dedicated rest centre at Thames View Community Centre. https://t.co/fHtGyRtbgD pic.twitter.com/JQBmXBL6O1

London Fire Brigade's Andy Maloney said: "Crews are continuing to work really hard at the scene to bring the fire under control."

A short time ago, the brigade said on Twitter that the fire was under control.

The #Barking fire at a block of flats is now under control. https://t.co/fHtGyRtbgD pic.twitter.com/3RjTSQ5hup

Almost two years ago, Grenfell Tower, a high-rise social housing block in west London, was engulfed by flames in the middle of the night, killing 71 people in the country's deadliest domestic fire since World War II.