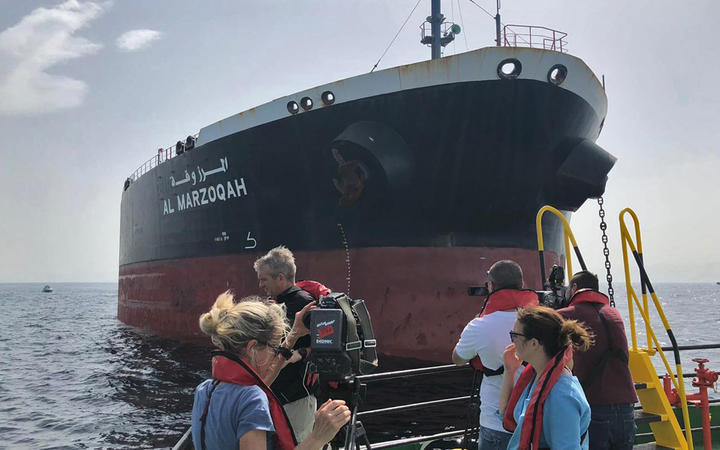 Saudi oil tanker Al-Marzoqah, one of the four tankers damaged in alleged "sabotage attacks" in May. Photo: AFP

The United Arab Emirates has told the UN Security Council a "state actor" was most likely behind attacks on four tankers off its coast.

The 12 May attacks bore the hallmarks of a "sophisticated and co-ordinated operation", according to its report.

The UAE did not say who it thought was behind the attacks, which also targeted vessels from Saudi Arabia and Norway.

The US has accused Iran of being behind the attacks but Tehran denies this and called for an investigation.

The chair of the ABC, Ita Buttrose, says this week's police raids were clearly designed to intimidate the national broadcaster.

Australian Federal Police officers executed a search warrant at the ABC's Sydney headquarters on Wednesday, over a series of 2017 stories known as the "Afghan Files", which criticised the behaviour of Australian Special Forces in Afghanistan.

Ms Buttrose says she had a "frank conversation" with Federal Communications Minister Paul Fletcher yesterday, but received no assurances that further raids would not occur.

She says the raids are a blunt signal of adverse consequences for news organisations who make life uncomfortable for policy makers and regulators.

Ms Buttrose, who is only the second woman to lead the ABC board, says an "untrammelled" media which upholds the community's right to information, has driven her journalistic career for almost five decades.

The man charged over a mass shooting in Darwin has used his first appearance in court to apologise for the rampage which ended with four people dead.

Benjamin Glenn Hoffmann, 45, appeared in Darwin Local Court via video link from prison wearing a red T-shirt and white shorts, with cuts on his face and forehead.

Hoffmann told the court he was "very sorry about what's happened"

Prosecutor Matt Nathan asked for an extended period of time to gather a brief of evidence before the next court appearance, which was set for September 18.

US and Mexico continue trade talks to avoid tariffs

Mexican and U.S. officials held a second day of talks on trade and migration, with markets rebounding on optimism a deal could be close, although it was unclear if Mexican pledges to curb migration flows were enough to persuade the Trump administration to postpone tariffs.

Donald Trump has warned that tariffs of 5% on all Mexican exports to the United States will go into effect next week if Mexico does not step up efforts to stem an increase in mostly Central American migrants heading for the U.S. border.

Bilateral talks have been organised quickly ,with the Mexican government, US business groups and even many of Trump's fellow Republicans keen to avert the tariffs, the prospect of which has rattled global financial markets.

Brazil soccer star Neymar has denied an accusation of rape, outlined in a police report , in which an unnamed woman alleges that the sports star drunkenly assaulted her at an up-market hotel in the French capital.

The accusation represents a fresh blow for the Brazilian, who has seen his international reputation suffer amid incidents of indiscipline.

Neymar posted a long video on his Instagram page, in which he denied all the accusations against him, claimed to be a victim of extortion, lamented the pain caused to him and his family, and shared WhatsApp messages with the alleged victim, including racy photos she sent him.

"I'm being accused of rape," he says in the video. "Whoever knows me, knows of my character and my nature, and knows that I would never do a thing like that ... What happened is exactly the opposite of what they're saying."

Labour shuts out the Brexit Party in Peterborough

Britain's opposition Labour Party narrowly held on to a parliamentary seat in eastern England , seeing off a challenge from Nigel Farage's insurgent Brexit Party to win by less than 700 votes.

The Brexit Party, which only launched in April, swept to victory in the United Kingdom's European Parliament election last month, riding a wave of anger over Prime Minister Theresa May's failure to deliver Brexit on time.

It had hoped to replicate that success by winning its first seat in the British parliament at the election in Peterborough, which supported Brexit by 61% to 39% in the 2016 referendum.

Earlier this week the naval taskforce arrived at Garden Island for a visit which the Government chose not to publicise.

There were about 700 personnel onboard the vessels, which spent four days in the city.

There was criticism about the timing which coincided with the anniversary of the Tiananmen Square massacre this week .