By Andrew Probyn and Andrew Greene *

Analysis - When three Chinese warships sailed through the Sydney Heads this week, defence figures with a keen sense of history felt an unmistakable tremor from the past, writes ABC's political editor Andrew Probyn and defence correspondent Andrew Greene. 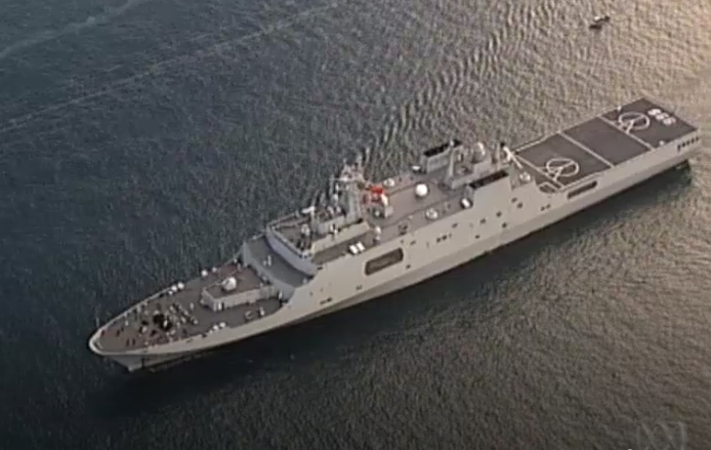 The ships of the People's Liberation Army Navy sailed straight past the Gothic-style Kirribilli House in a display of naval reach that unnerved some in Government for the strategic nous shown by Beijing.

"There is nothing routine about anything involving China," one veteran watcher observed.

Over in the Solomon Islands, where the Prime Minister was beginning a three-nation trip initially geared at reasserting regional oversight against Chinese interest, Scott Morrison displayed nonchalance, saying it was a "reciprocal" visit.

"And that is a further demonstration of the relationship that we have [with China], and this had been in train for some time," he said.

Some Coalition MPs were not convinced.

If the PM knew about a visiting naval delegation, as he seemed to be suggesting, why didn't NSW Premier Gladys Berejiklian know about it, they wondered.

Mr Morrison correctly acknowledged the warships were returning from counter-drug trafficking operations in the Middle East, but did not mention that immediately before sailing into Sydney, the Chinese taskforce had been conducting live-firing exercises west of Australia in the South Indian Ocean.

Those history buffs in defence saw the four-day visit in the troubling context of shifting power tectonics, with a distinct echo of events from the beginning of the 20th century.

For Australia, just seven years after federation, the 1908 visit was an important moment of post-colonial independence - prime minister Alfred Deakin had invited the US fleet to visit amid growing annoyance at the British Admiralty's antipodean neglect.

The US display of power and reach through the Great White Fleet's 14-month global tour confirmed its arrival as the regional power, some 70-odd years after French diplomat Alexis de Tocqueville presciently observed the US and Russia were marked to "sway the destinies of half the world".

But that is a long time ago.

The arrival of the Modest Red Fleet in Sydney Harbour on Monday - the day before the 30th anniversary of the Tiananmen massacre - has some wondering if it was equally significant.

If the professional strategic cynics are to be believed, the Chinese chose their timing with great precision; the flotsam of an election was still washing on Australian shores and new Defence Minister Linda Reynolds still finding her feet.

"She's still drinking from a fire hose," was how one put it, describing the ministerial download required to be properly "situated" of the task at hand.

At around lunchtime on Friday the Chinese Naval Taskforce will depart Garden Island Naval base, leaving behind an active debate inside Defence and the Government over how to handle future visits.

"It's a question of making sure we're taking the public into our confidence, explaining the movement of ships right around Australia," said Defence Personnel Minister Darren Chester.

Many of his colleagues agree.