There are fears an innocent man may lose the use of his left arm after he was seriously injured during a botched police raid in Melbourne. 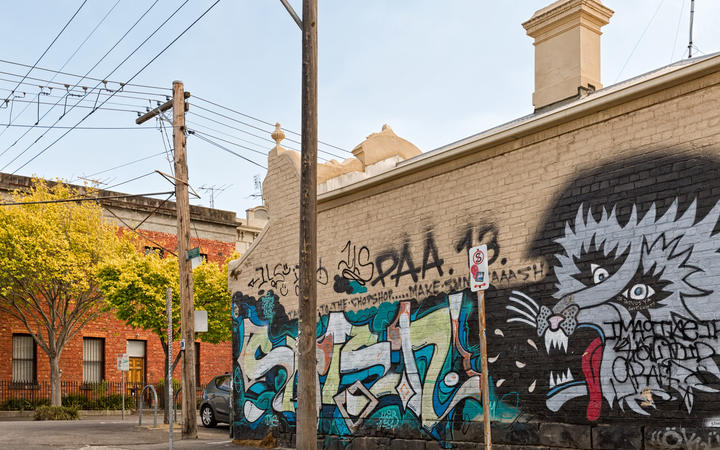 Street art in Fitzroy, where Victoria police admit seriously injuring a man who was mistakenly identified as a suspect. Photo: 123rf

The operation in Fitzroy, in Melbourne's inner north, is now the subject of a Victoria Police internal investigation.

Residents said officers raided their apartment, which adjoins LGBT community bookshop and cafe Hares & Hyenas on Johnston Street, at about 2am today.

"The police broke in through our garage as they thought that an armed member of a Lebanese gang was inside," said bookshop co-owners Rowland Thomson and Crusader Hillis in a post on Facebook.

"At no stage did they identify themselves as police. They just stormed into a dark room shining torches and it was impossible to identify them as police."

They said another man, Nik Dimopoulos, ran from the building "thinking it was an anti gay home invasion", and was subsequently arrested on the street.

"He had his hands tethered behind his back way beyond what can be endured," the co-owners said.

"He could only see boots and rifles and was assuming he was going to be bashed or shot. He said he thought he was about to be killed."

They said Mr Dimopoulos is "now in hospital with the likelihood of losing the use of his left arm, which is broken in several places".

He also sustained major bruising on his head after being thrown onto the footpath.

Victoria Police confirmed Mr Dimopoulos was mistakenly identified as the suspect in a home invasion and carjacking case.

Officers had been tracking a stolen car which led them to the Fitzroy address, where police say they saw a man fitting the description of their suspect.

"The male was arrested on a roadway after leaving through a front door," Victoria Police said in a statement.

"The male sustained serious injuries as a result of the arrest and was subsequently conveyed to hospital where he remains.

"The man police arrested was mistakenly identified as the suspect police were searching for that had fled the stolen vehicle nearby.

"Victoria Police acknowledge the distress this situation has caused the victim and the incident will be thoroughly investigated by Professional Standards Command."

A Victorian parliamentary committee last year found the system for investigating police misconduct was "extraordinarily complex and confusing" and based on an "intricate, overlapping and sometimes fraying patchwork of laws, policies and processes".

It called for a police corruption and misconduct division to be created within IBAC.

Anthony Kelly, from the Flemington and Kensington Community Legal Centre's Police Accountability Project, said the Fitzroy raid should be investigated by IBAC.

"Time and time again, police investigating other police has proven to be woefully inadequate and not achieving the sort of scrutiny and accountability that we need in Victoria," he said.