An elderly man has been filmed driving a mobility scooter along Melbourne's Monash Freeway, as a worried motorist tails him with his hazard lights on to protect him from traffic. 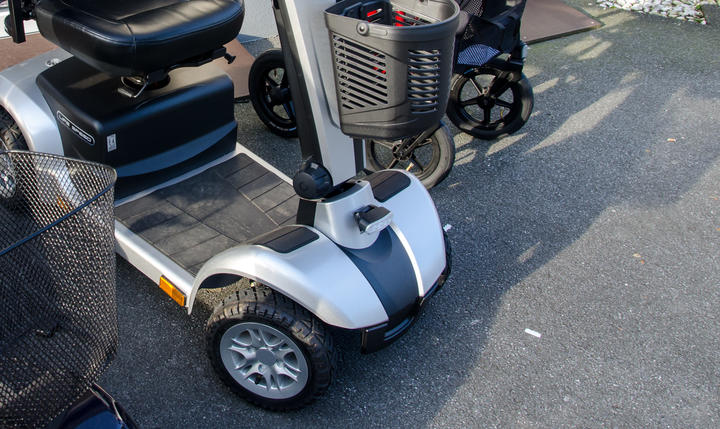 The 92-year-old man was pulled over by police after driving on the Monash Freeway in the city's eastern suburbs at about 3pm yesterday.

Police said he had been reported missing earlier that day.

A passing motorist, identified as Bruce in dash cam vision shared on Facebook, spotted the man merging into the 100kph traffic and followed the scooter.

The footage shows Bruce unsuccessfully urging the elderly man to pull over.

"Move over mate, move over, you're not supposed to be on the freeway," he can be heard saying.

Bruce then calls triple-zero while following the scooter moving in and out of the service lane and the busy flow of traffic.

"He's on the Monash outbound, I tried to pull him over but he told me to f*** off," Bruce tells the triple-zero operator.

Operator: "He's on a mobility scooter?"

Bruce: "Yeah, I'm just going behind him with my hazards on but the traffic's obviously pretty dangerous."

Operator: "What colour is his mobility scooter?"

Bruce: "Brown and black. There's only one, they won't miss him. I'll wait for police, I don't want him to get hit."

The dash cam footage shows a police car pulling the scooter rider over soon after.

"A passing motorist spotted the 92-year-old man merging into traffic in the 100kph zone and travelled behind him with hazard lights," a Victoria Police statement said.

"Police quickly arrived and spoke to the Glen Waverley man and determined he had been reported missing a short time earlier by family members.

"He was taken to Glen Waverley Police Station where he was reunited with his family."