Australian right-wing party One Nation's candidate for Queensland senator, Steve Dickson, has resigned after footage was released of him making sexual and racial slurs and touching dancers in a US strip club. 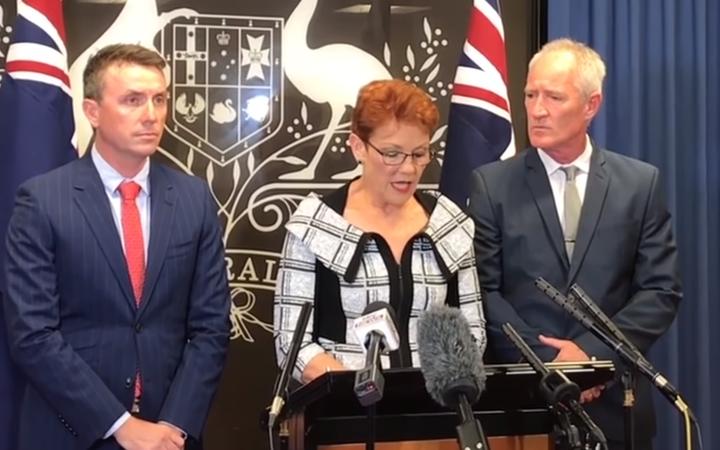 He refers to one dancer as a "b**ch" and says of another: "Little t**s, nothing there." He also said "I think white women f**k a whole lot better, they know what they're doing. Asian chicks don't. I've done more Asian than I know what to do with."

Another segment shows him talking with a dancer after slipping money into her lingerie.

"You need to slide your hand on my ****," he says to the dancer. "Right now?" she asks. "Yeah absolutely," he responds. She declines, saying: "I can't do that sorry, they'll probably notice."

In a statement, Mr Dickson apologised for his behaviour.

"The footage shown does not reflect the person I am. It shows a person who was drunk and not in control of his actions and I take full responsibility for allowing that to happen," he said.

He said he was deeply remorseful for his "disrespectful comments towards women".

"I found the footage difficult to watch as my words and actions under intoxication and in that environment, are not a true reflection of myself," he said.

"Despite being on a self-funded trip with a person who I never imagined to be an undercover journalist funded by the Qatar Government."

"I'm upset with this, Steve is a family man ... I'm sorry he is deeply upset by this I'm not going to judge him any further."

Ms Hanson said the footage could not be ignored or condoned.

"I am both a mother of three boys and the only female leader of a political party in this country," she said.

"I wouldn't tolerate my own children behaving this way towards women and I cannot and will not condone my own candidates dealing with women in this fashion either.

"I am aware that strip clubs are a perfectly legal business and that many men in this country have visited one, just like women hire strippers for hens nights.

"But Steve's language and behaviour was unacceptable and does not meet my expectations nor the greater public's expectations of a person who is standing for public office."

Mr Dickson is already on the Queensland Senate ballot paper in the second One Nation spot, behind former senator Malcolm Roberts.

Ms Hanson said it would be "highly unlikely" Mr Dickson would be elected.

The video was recorded during an undercover investigation by Al Jazeera as part of the same operation which last month revealed Mr Dickson and party advisor James Ashby travelled to the US last year seeking campaign help from lobby groups like the National Rifle Association (NRA).

However, it was broadcast for the first time by The Nine Network's A Current Affair on Monday without Al Jazeera's permission.

"The material was gathered but a decision was made by Al Jazeera not to broadcast it as part of the investigation, How to Sell a Massacre," it said in a statement.

"Al Jazeera did not consider it in the public interest to broadcast the material.

"Despite Al Jazeera's own decision not to publish the images, they have now been published without Al Jazeera's consent."

"I will put my hand on my heart - I've drunk as a young man," he said. "I've been to strip clubs, probably done a lot of things most young men have done in this country.

"I understand that - I won't hold that against any human being.

At the time, Mr Ashby also called on Al Jazeera to release the full extent of their recordings, calling their reporting "a sham".

"Release the vision in full," he said.

"Allow the people of this country to be able to see exactly what was said.

"The context that they have released is completely wrong."