Australia's One Nation leader Pauline Hanson says she has not had time to watch the full Al Jazeera investigation that has engulfed her political party, but she thinks the footage was dubbed and heavily edited. 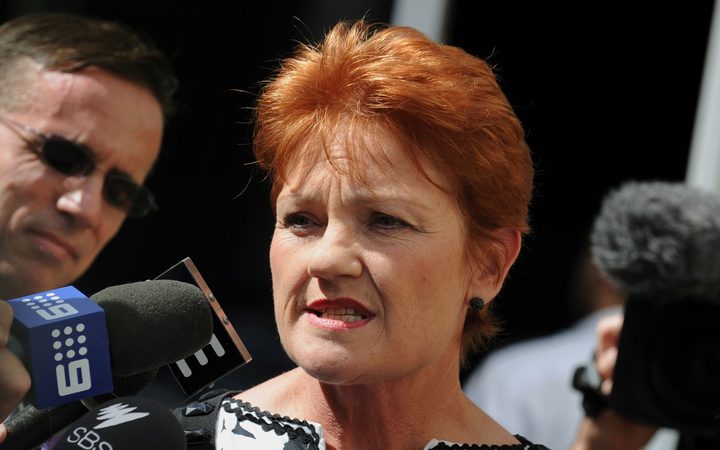 Ms Hanson has attacked the media for reporting the documentary, which showed her appearing to suggest the Port Arthur massacre was part of a government conspiracy.

Ms Hanson's chief of staff James Ashby and One Nation Queensland leader Steve Dickson were captured on secret recordings that revealed both men wanted millions of dollars in donations from America's National Rifle Association and discussed softening the party's policies on gun ownership as they tried to secure the funding.

Ms Hanson said she had not watched the documentary in full, but the conversations she had with the undercover journalist at a dinner in the central Queensland town of Yeppoon were "cut and pasted".

"No I haven't [watched the full documentary]. [I've only seen] what's been portrayed by the media, but what I know by that is I don't even see his face," Senator Hanson told the Today Show this morning.

"I don't see his lips moving. I feel that this has been dubbed out and it has been cut and pasted so many times."

'It wasn't a very big book'

Ms Hanson has labelled the undercover journalism a "sting".

"It's how the question was put across and there's no denying … the whole lot was cut and spliced," she said.

During the conversations, Ms Hanson implied the Port Arthur massacre was part of a government conspiracy to ban guns in Australia.

"A lot of questions there."

Ms Hanson did not deny making those comments.

"It was about the Port Arthur. It was light blue in colour. It wasn't a very big book," she said when asked about the material she had referred to.

Ms Hanson said she did not take responsibility for her comments.

"No I don't. Because I'll tell you what, this was a sting. It was set up to discredit One Nation," she said.

"The media have portrayed that we actually went to the NRA for funding for money, which was never the case.

"They say that we wanted to water it down, the gun laws; never, ever the case."

Ms Hanson has said Mr Ashby and Mr Dickson will retain their positions.

She reiterated her comments labelling Prime Minister Scott Morrison a "fool" after he announced the Liberals would preference One Nation below the Labor Party at the federal election.

"He is a fool because he's fallen into the trap of what the Labor Party and the Greens want, because he's just handed the keys to them for the Lodge," she said.

She said the media had been blinded by its hate and bias for One Nation and had fallen victim to political interference from the "Islamist" Qatari government by reporting on the continuing scandal.