Canada is warming on average at a rate twice as fast as the rest of the world, a new scientific report indicates. 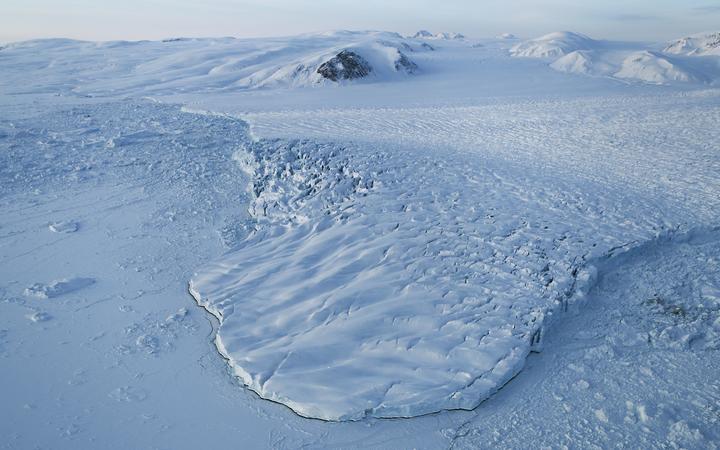 A glacier is seen from NASA's Operation IceBridge research aircraft on March 30, 2017 above Ellesmere Island, Canada. The ice fields of Ellesmere Island are retreating due to warming temperatures. Photo: AFP

The federal government climate report also warns that changes are already evident in many parts of the country and are projected to intensify.

Canada's Arctic has seen the deepest impact and will continue to warm at more than double the global rate.

The report suggests that many of the effects already seen are probably irreversible.

Canada's annual average temperature has increased by an estimated 1.7C since 1948, when nationwide temperatures were first recorded.

The largest temperature increases have been seen in the North, the Prairies, and in northern British Columbia.

"While both human activities and natural variations in the climate have contributed to the observed warming in Canada, the human factor is dominant," the report states.

"It is likely that more than half of the observed warming in Canada is due to the influence of human activities."

The report came as the government imposed carbon taxes on four of Canada's 10 provinces for failing to introduce their own plans for tackling climate change.

What are the effects?

The effects of global warming on Canada's environment include more extreme weather.

Hotter temperatures could mean more heat waves and a higher risk of wildfires and droughts in some parts of the country.

Oceans are expected to become more acidic and less oxygenated, which could harm marine life.

Parts of Canada's Arctic Ocean are projected to have extensive ice-free periods during summer within a few decades.

A rise in sea levels could also increase the risk of coastal flooding and more intense rainfall could cause problems with flooding in urban centres.

Canada's rapid warming is due to a number of factors, including a loss of snow and sea ice, which is increasing the absorption of solar radiation and causing larger surface warming than in other regions, according to the report.

Despite the bleak projections, the report notes that the amount of warming could be limited if global action is taken by drastically reducing "carbon emissions to near zero early in the second half of the century and [reducing] emissions of other greenhouse gases substantially".

Canada is one of nearly 200 countries that have signed on to the Paris Agreement - a single global agreement on tackling climate change that seeks to keep temperatures "well below" 2C above pre-industrial times and "endeavour to limit" them even more, to 1.5C.

The Canadian government says it will meet the Paris target of cutting emissions to 30 percent below 2005 levels by 2030 despite the fact that a number of official reports indicate the country is unlikely to meet its reduction targets without significant effort.

University of Toronto professor Matthew Hoffmann told the BBC that, like the recent Intergovernmental Panel on Climate Change report, this one underscores the warnings about the impact of climate change.

"This is yet another reaffirmation of the urgency of this problem," he said.

Civil society appeared to be at a "tipping point" on the issue with public opinion moving in support of governments taking action.

Mr Hoffmann points to recent student protests in the UK, Canada and elsewhere pushing for governments to take active steps to tackle the problem.

"People are starting to feel climate change - it's starting to be part of their lived experience," he said.

What else is the government doing?

Prime Minister Justin Trudeau warned the country's provinces two years ago that they needed to come up with plans by 1 April setting out how they would contribute to Canada's reduction targets.

The four that the government accuses of failing to do so are Ontario, Manitoba, Saskatchewan and New Brunswick.

The carbon tax will be added to the cost of fuel - 4.4 Canadian cents per litre initially - equivalent to 20 Canadian dollars per tonne of carbon produced, more than doubling by 2022.

However, households are expected to be compensated by the federal government in the form of "climate action incentive" rebates.

The opposition Conservatives have vowed to scrap the tax should they win federal elections in October.