French police have banned "yellow vest" protesters from the Champs-Élysées in Paris on Saturday after rioters destroyed businesses last week. 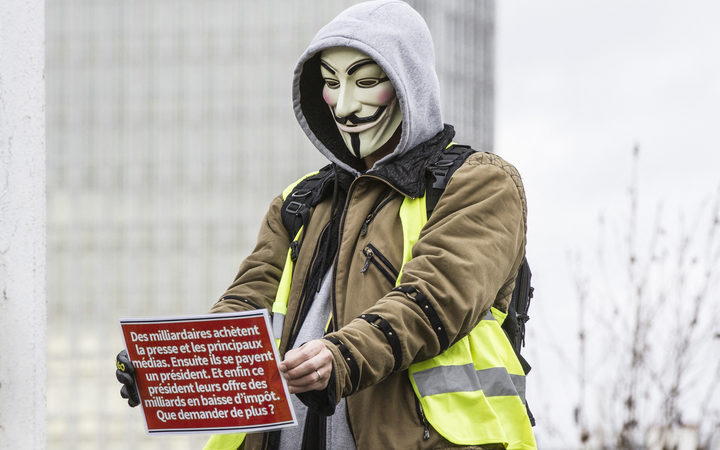 A Yellow Vests demonstrator wears an anonymous mask and holds a sign denouncing the press at the Arc de Triomphe in Paris. Photo: Photo / AFP

The government has warned that it intends to react severely against any new outbreak of violence.

The government for the first time is deploying soldiers to help maintain security, both in Paris and in Nice.

But there has been widespread criticism over anti-terrorist forces being used as crowd control.

A soldier from the anti-terrorism Sentinelle patrol force told the Franceinfo website of their discomfort at being deployed to control the protests.

"Sentinelle guys are all soldiers - we don't know how to keep order," the soldier said, speaking on condition of anonymity.

Politicians from across the political spectrum also voiced concerns.

Bruno Retailleau, leader of the main opposition Republicans in the Senate, told the France 5 television channel that the decision was a "serious mistake".

The movement soon evolved into a broader rebellion against perceived elitism, for which activists blame President Emmanuel Macron.

Money has been raised for owners of kiosks that were burned out and some were being replaced on Friday.

Concessions were offered to protesters late last year as the movement was picking up speed - including €10 billion ($16.5b) designed to raise incomes of the poorest workers and pensioners. But this has not put an end to the riots.

For the past month the president has toured France, listening to local mayors and citizens as part of his "grand débat" - a big national debate.