The French government will replace the police chief in Paris and ban rallies in some areas, after violent Yellow Vest protests on 16 March. 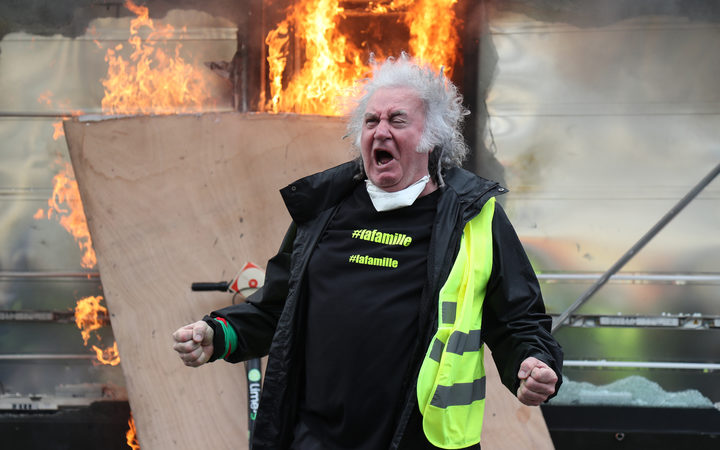 Prime Minister Edouard Philippe said the authorities would act as soon as "radical groups" were identified in the worst-hit areas.

About 10,000 people took part in the protest, a marked increase compared with similar rallies recently.

The "yellow vests" ("gilets jaunes") began weekly protests across France four months ago, initially because of fuel tax rises. The movement escalated into a broader revolt against perceived elitism, for which activists blame President Emmanuel Macron.

The famous Fouquet's restaurant - a haunt of previous French presidents - was badly damaged in the latest clashes.

The Paris Ile-de-France Chamber of Commerce says that 91 businesses were hit, nearly all of them suffering serious damage.

What did PM Mr Philippe say?

In a televised statement, Mr Philippe said: "From next Saturday, we will ban 'yellow vest' protests in neighbourhoods that have been the worst hit as soon as we see signs of the presence of radical groups and their intent to cause damage."

The restrictions will apply to Paris and other cities.

Mr Philippe also admitted that "inappropriate instructions" had been given to Paris police to deal with protesters on 16 March. 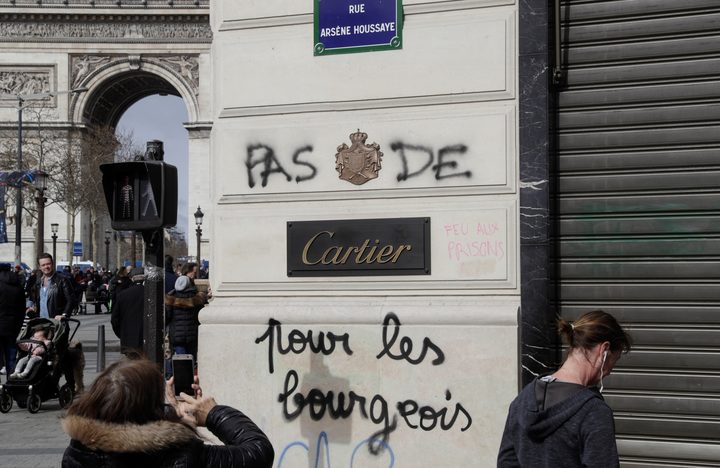 Organised groups of ultra-left radicals were largely responsible for the protest violence, but there has also been widespread criticism of the police response, the BBC's Hugh Schofield in Paris reports.

Far from intervening rapidly to stop the rioting, the police seemed to be on the defensive - one explanation being that they were reluctant to use their more powerful anti-riot ammunition, because of concern over the injuries they can cause, our correspondent says.

"Now that's the end. I demand that such scenes must not be repeated, especially on that [Champs-Élysées] avenue," he said. 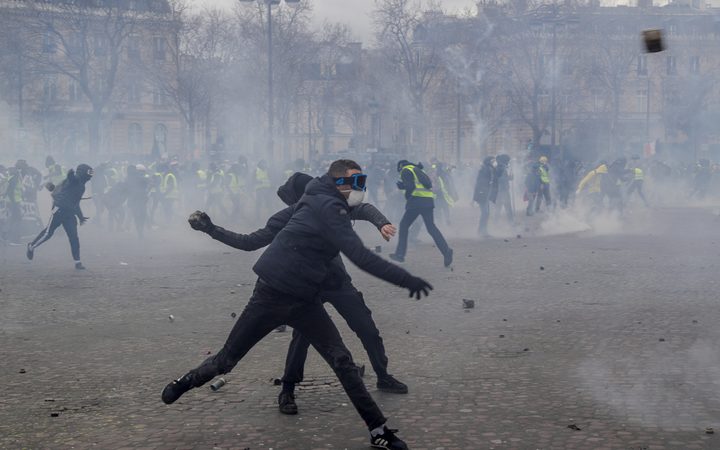 Police used water cannons and tear gas to disperse the protesters. More than 120 people were arrested.

During the clashes, a policeman was filmed apparently stuffing Paris Saint-Germain football shirts into a bag. Police are probing that incident.

Mr Buisine is heard shouting: "Why are you hitting me like that? What right have you to hit my phone?"

He also asks the police why their ID numbers are not visible.

One is heard replying: "You're liars."

The "gilets jaunes" mobilisation was bigger than similar demonstrations in recent weeks.

Some 32,300 in total took to the streets throughout France, according to the interior ministry.

Mr Macron offered concessions to the protesters late last year after the movement swept the nation - including €10bn ($NZD16.6bn) designed to boost the incomes of the poorest workers and pensioners. But discontent has rumbled on.

For the past month the president has toured France, listening to local mayors and citizens as part of his "grand débat" - a big national debate.