Demonstrators have looted shops in Paris in a resurgence of the gilets jaunes ("yellow vest") protests that started four months ago in France.

The protests began over fuel tax rises but have since developed into a broader revolt against perceived elitism. 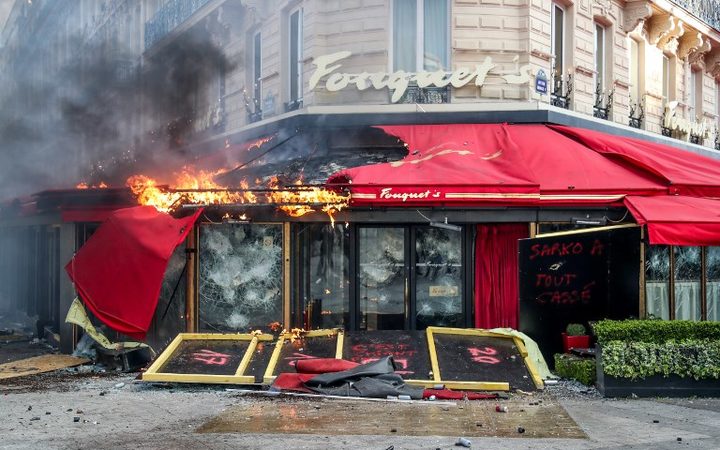 A restaurant on fire during clashes between riot police and 'gilets jaunes' on the Champs-Elysees, Paris on 16 March. Photo: AFP

Police used water cannon and tear gas to disperse the protesters, who had dwindled in numbers in recent weeks before Saturday's revival.

As well as a surge in numbers on Saturday, there was a return to the levels of violence that characterised the early protests. Fouquet's - an upscale restaurant popular with politicians and celebrities - was vandalised, as was a Boss menswear store. Fires were lit in the streets, with at least one car set ablaze, and a bank was set alight.

The bank is located on the ground floor of an apartment building, which which was engulfed by flames. The fire service evacuated the residents and extinguished the blaze. Eleven people, including two fire fighters, suffered minor injuries, a spokesman told the AFP news agency.

Interior Minister Christophe Castaner said that more than 1400 police officers had been mobilised and police said they had arrested more than 80 protesters by mid-afternoon.

Mr Castaner said he had given police an order to respond to the "unacceptable attacks with the greatest firmness". Writing on Twitter, he said: "Let there be no doubt: they are looking for violence and are there to sow chaos in Paris."

He said the protests still remained small compared with the early days of the movement, with an estimated 8000 people on the streets on Saturday. "But within this 8000, there are more than 1500 ultra-violent people who are there just to smash things up, to fight and to attack," he said.

In January, the government ordered police to crack down on violence in the protests, leading to complaints of police brutality.

President Emmanuel Macron offered concessions to the protesters after the movement swept the nation - including €10bn designed to boost the incomes of the poorest workers and pensioners - but they failed to quell the discontent.

For the past month, Mr Macron has toured France, listening to local mayors and citizens as part of his "grand débat" - a big national debate. He has also asked communities to come together and put forward their ideas for how to fix France, and there have so far been 8253 local meetings.

The yellow vest movement has faced accusations of anti-Semitism in recent weeks after a prominent Jewish philosopher, Alain Finkielkraut, was targeted by insults and taunts in Paris. 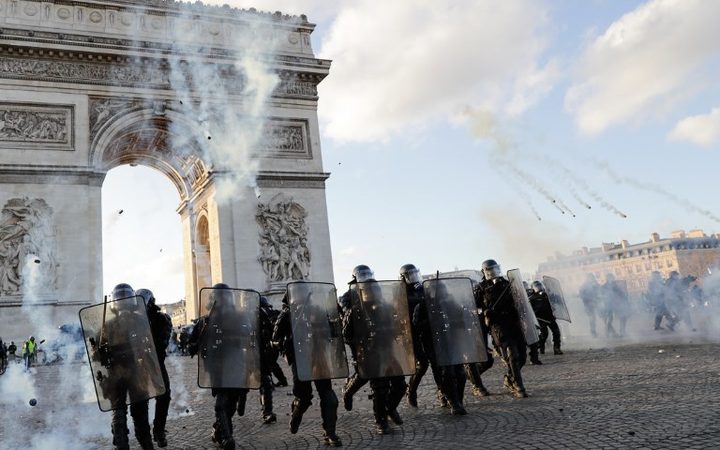 Officers in Paris intervened to form a barrier after a group of individuals involved in the march confronted Mr Finkielkraut and started verbally insulting him.

The 69-year-old academic told Le Parisien newspaper that he heard people shouting "dirty Zionist" and "throw yourself in the canal".

A few days before Mr Finkielkraut was attacked, official data suggested there had been a 74 percent rise in anti-Semitic attacks in France last year.