Cyclone Trevor is expected to pummel parched inland regions in Australia with heavy rainfall tomorrow after slamming into the Northern Territory coast with wind gusts up to 250 kilometres per hour this morning. 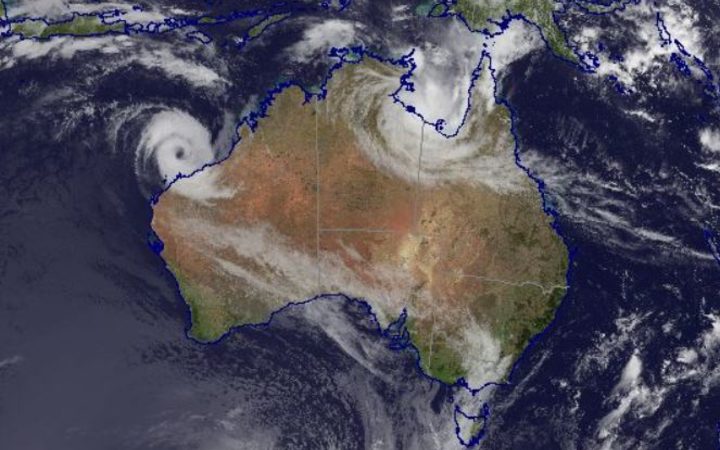 The category four storm made landfall at about 10:00am on Saturday morning about 100 kilometres to the south-east of Port McArthur. It is making its way inland as a category three system.

The Bureau of Meteorology's NT manager Todd Smith said it was expected to stay at tropical cyclone strength until Sunday morning, before turning into a rain depression and bringing 100 to 200mm of rain per day through the outback Barkly region and to communities near the Queensland-NT border on Monday and Tuesday.

An emergency operations centre is now up and running in Alice Springs, and residents are advised to stay vigilant of flash flooding.

Mr Smith warned some areas had received hardly any rain in nine months, so rain may be more likely to run off the baked ground than soak into it.

"When the monsoon is on like this, when there's a tropical cyclone around, the weather picks up right across broad areas."

Rainfall may continue until Wednesday, when a high pressure system is expected to push through and clear the system out.

Winds to remain dangerous for another 24 hours

Given the system was so large, Mr Smith said gale force winds were being felt 250km from its centre.

Mornington Island, which is 200km from the storm, recorded gusts of 105km/h and received a 1.5m storm surge.

"Now that we're seeing it moving inland we'll see those gale force winds start to contract a little, however the winds around the centre of the system, around that core, will remain dangerous for the next 12 to 24 hours."

Gale force winds at Borroloola are expected to pick up during the afternoon as the cyclone tracked south, and could reach category one or two cyclone strength.

As the system continues to track south west at about 15km/h, residents in coastal communities to the east were asked to be wary of a severe storm surge.

Evacuees may return to some communities tomorrow

Around 2100 evacuees registered with the NT government at shelters in Katherine, Tennant Creek, Darwin and Nhulunbuy.

Many others who chose to evacuate were not included in this figure.

NT regional emergency controller Travis Wurst said even though warnings had now been lifted in some communities, his crews were still assessing whether it was safe for evacuated residents to return.

He said they have received word there was minimal infrastructure damage on Groote Eylandt and was awaiting advice out of Borroloola, Numbulwar and Vanderlin Island.

At this stage, he said people may be able to return to Groote Eylandt and Numbulwar by tomorrow at the earliest, if they were able to secure power, safe drinking water and food.