Australia's Northern Territory has begun its largest mass evacuation since 1974, with Cyclone Trevor expected to strengthen to a category four or five as it moves west. 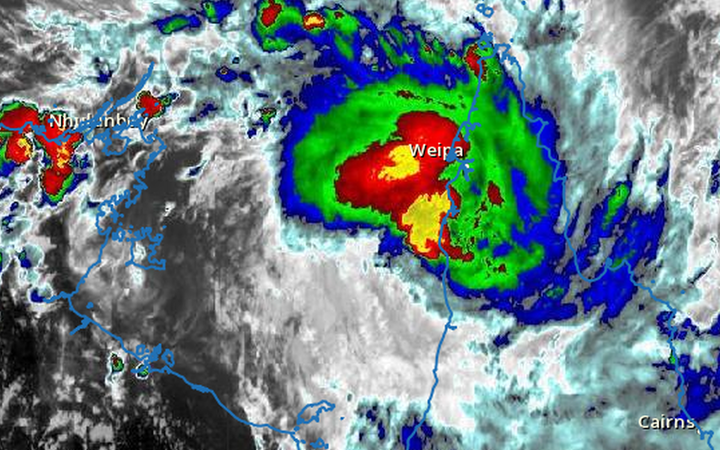 A state of emergency has been declared in Australia's Northern Territory as Cyclone Trevor moves across the top of the country.

If the cyclone tracks on the path that is predicted, it could slam into the town at full force as a category four storm system on Saturday.

Mattresses, blankets and other precious items are being packed tight into utes in the Gulf of Carpentaria town of Borroloola as residents flee ahead of Cyclone Trevor's arrival.

The Australian Defence Force began flying residents from the island of Groote Eylandt - which has now been placed on a cyclone warning - and the town of Borroloola to Darwin yesterday.

However evacuations from Groote Eylandt have stopped for now as the storm tracks in a more southerly direction, towards Borroloola. About 600 people have already evacuated from the island, which has a population of about 1600. The remaining residents have to shelter on the island.

Of Borroloola's population of about 2000, the defence force has begun flying residents out while many others have evacuated by road.

"Most of them are getting evacuated - the babies, the mums and the elderly," resident Nola Anderson said.

"Others that can drive out are driving out now."

Fuel vouchers have been distributed by a Borroloola Aboriginal organisation to help people escape the impending storm system.

Ms Anderson said she was worried about what the cyclone could do to her hometown.

"Hopefully there's not too much damage, but looking at the size of it, we're expecting the worst."

Basil Mamarika was evacuated from Groote Eylandt to a Darwin shelter just before dawn on Thursday.

"It was frustrating. I wanted to stay back but the police says nobody can stay back because of the cyclone," he said.

"I'm so worried about my three dogs and my cat. I had to leave them inside my house."

Mr Mamarika spent Thursday sleeping, hugging his grandchildren and trying to stay calm while his community went through an unprecedented evacuation.

The Northern Territory has not seen a cyclone of this strength since Cyclone Lam, which destroyed 80 homes and left 600 people homeless.