Indian military officials say they welcomed Pakistan's planned return of a captured pilot, but refused to confirm they would de-escalate a conflict between the two nuclear powers. 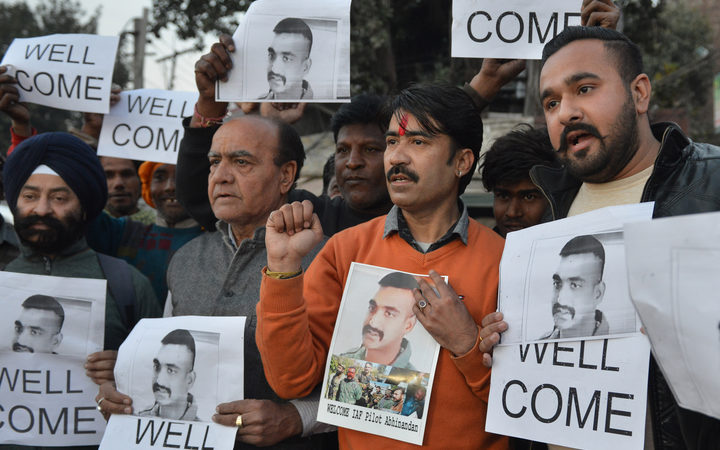 The pilot, identified as Wing Commander Abhinandan, became the human face of the flare-up over the contested region of Kashmir, following the release of videos showing him being captured and later held in custody.

"We are happy our pilot is being released," said Air Vice Marshal RGK Kapoor, at a joint news conference of India's three armed forces.

He did not say when asked by reporters if India considered the return a de-escalation in the conflict.

Pakistan Prime Minister Imran Khan said the pilot would be released tomorrow, to the relief of many Indians, even as his military reported that four Pakistani civilians had been killed by India firing across the disputed border in Kashmir.

"As a peace gesture we will be releasing him tomorrow," Mr Khan told Pakistan's parliament today. Lawmakers thumped their desks in response.

"We will celebrate his release tomorrow," said Vinay Bhardwaj, 34, a plumber in Nawshera, a border town in Indian-controlled Kashmir. "People are very happy about that here."

The United States, China, European Union and other powers have urged restraint from the two nations, as tensions escalated following a suicide car bombing that killed at least 40 Indian paramilitary police in Indian-controlled Kashmir on 14 February. 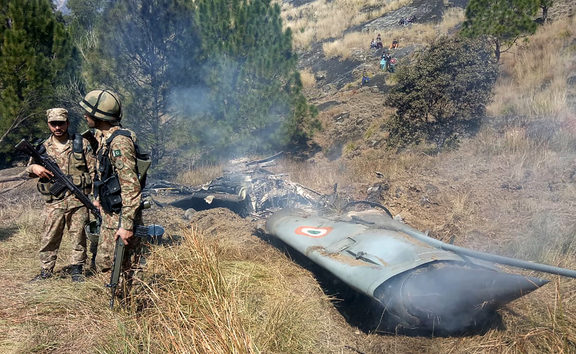 Pakistani soldiers stand next to what Pakistan says is the wreckage of an Indian fighter jet shot down in Pakistan-controlled Kashmir. Photo: Photo/AFP

The Muslim-majority Himalayan region has been at the heart of more than 70 years of animosity, since the partition of the British colony of India into the separate countries of Muslim Pakistan and majority Hindu India.

It is divided between India, which rules the Kashmir Valley and the Hindu-dominated region around Jammu city, Pakistan, which controls a wedge of territory in the west, and China, which holds a thinly populated high-altitude area in the north.

Earlier this week, India said it hit a training camp for a Pakistan-based group who claimed responsibility for the suicide attack, and a senior government source told reporters that 300 militants had been killed.

Pakistan denies this, saying the attack was a failure and no-one died, with bombs dropped on a largely empty hillside. It denies any militant camp was in the area. Local people said they had seen no sign of major casualties or significant damage, with only one man known to have been slightly hurt by the bombs.

Asked about the damage caused by Indian warplanes in the air strike, Mr Kapoor said it was premature to provide details about casualties. But they said they had "credible" evidence of the damage inflicted on the camp by the air strikes.

"Whatever we intended to destroy, we did," he said.

The escalation marked the latest deterioration in relations between the two countries. As recently as November, Mr Khan had spoken of "mending ties" with India. 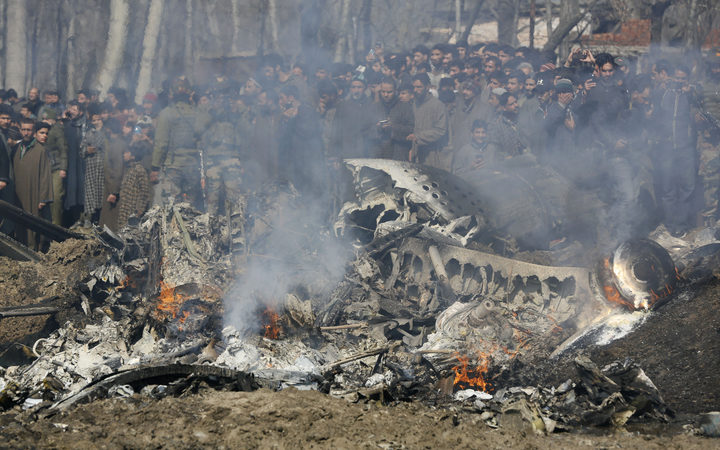 Kashmiri villagers gather near the wreckage of an Indian aircraft after it crashed in Budgam area, outskirts of Srinagar, Indian controlled Kashmir, on 27 February. Photo: AP Photo/Mukhtar Khan

Mr Khan's decision to release the pilot came after several countries offered diplomatic assistance to mediate between two countries, that have gone to war three times since their independence from British colonial rule in 1947.

US Secretary of State Mike Pompeo said after Mr Khan's announcement that he had spoken to the leaders of both countries and urged them to avoid "any action that would escalate and greatly increase risk".

Earlier, US President Trump said he expected "reasonably decent news" regarding the conflict between India and Pakistan, adding that the United States was trying to mediate.

"They have been going at it and we have been involved in trying to have them stop," Mr Trump said in Hanoi, where he was attending a summit with North Korea's leader.

"We have been in the middle trying to help them both out."

Mr Khan's office said the prime minister had spoken to Turkish President Tayyip Erdogan and the United Arab Emirates Crown Prince Sheikh Mohamed bin Zayed bin Sultan al-Nahyan and that both had appreciated his willingness to find a peaceful resolution to the crisis.

Mr Khan has already called for talks with India to prevent the risk of a "miscalculation" between their militaries.

India's Prime Minister Narendra Modi, who faces a general election in a matter of months, today told a rally of supporters that India would unite against its enemies. 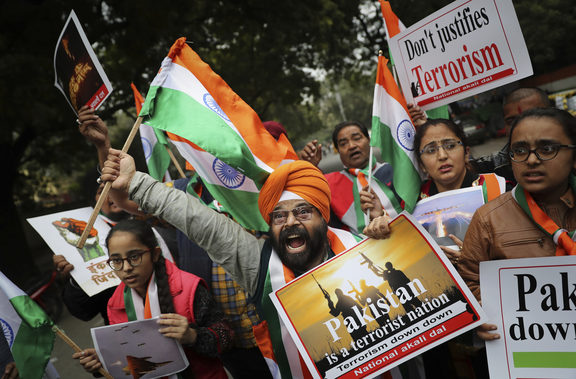 "The world is observing our collective will. It is necessary that we shouldn't do anything that allows our enemy to raise a finger at us," he said.

The United States, Britain and France proposed the United Nations Security Council blacklist Masood Azhar, the head of Pakistan-based Jaish-e-Mohammad, the group that claimed responsibility for the 14 February attack. China is likely to be oppose the move.

As a precaution amid the increased military activity, Pakistan has shut its airspace, forcing commercial airlines to reroute.

Thai Airways International announced that it had cancelled flights to Pakistan and Europe, which left thousands of passengers stranded in Bangkok.

Indian and Pakistani troops traded fire along the contested border in Kashmir on at least three occasions today, with the firing instigated by Pakistan every time, according to New Delhi. Pakistan said the ceasefire violations were by India.

Pakistan's military said four civilians had been killed and two wounded in what it called a "deliberate" attack by India during the past 48 hours. A civilian on the Indian side of the border was killed in the firing today, an Indian official said.

India is building more than 14,000 bunkers for families in Jammu and Kashmir state living close to the border, hoping to keep them safe near their homes rather than evacuate them.

With a general election due in India by May, a surge in nationalism from any conflict with Pakistan could become a key factor, potentially favouring Modi's Hindu nationalist Bharatiya Janata Party (BJP).

"This has brought a pro-Modi wave all through the country," B.S. Yeddyurappa, a BJP leader in the southern state of Karnataka, told reporters. "The effect of this will be seen in the elections."