Nine people, including four Indian soldiers and a policeman, have been killed in Indian-administered Kashmir during a gun battle, police say. 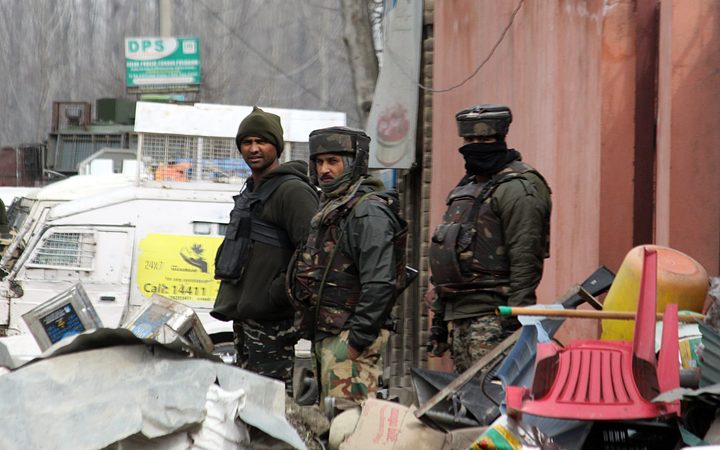 The clash occurred in Pulwama, where more than 40 Indian paramilitary police were killed in a bombing last week.

That attack, the worst in decades, has fuelled tensions between nuclear-armed India and Pakistan.

A civilian and three alleged militants were also among those killed in Monday's confrontation.

Police say the three suspected militants who were killed are members of Pakistan-based group Jaish-e-Mohammad (JeM), which said it was responsible for Thursday's suicide bombing.

Pakistan denies any role in the bombing, but India has accused the state of being complicit.

India recalled its top diplomat to the country in the wake of the attack and Pakistan has now also recalled its ambassador from Delhi for consultations.

The operation lasted 16 hours on Monday, with heavy gunfire reported as Indian security personnel appealed to villagers to stay indoors.

Among the Indian soldiers killed was an army major, police and military officials said. They said another six members of the Indian military were also injured in the battle.

The operation targeted a residential area said to be a hideout for suspected militants.

The suicide bomber was identified as a local Kashmiri aged between 19 and 21.

More than 20 people were detained on Sunday, according to police.

How high are tensions?

Kashmir has been a flashpoint between India and Pakistan since independence.

Both countries claim all of Muslim-majority Kashmir but control only parts of it. They have fought two wars and a limited conflict in the region.

Thursday's attack was the deadliest attack against Indian forces since an Islamist-led insurgency began in 1989. It sparked anti-Pakistan protests in some Indian cities and angry mobs targeted Kashmiri students and businessmen.

Mobile internet services in Indian-administered Kashmir were cut over the weekend and the Indian government has pulled security normally provided to at least five Kashmiri separatist leaders.

Isolated incidents of students from Kashmir being beaten up or evicted from their accommodation in northern Indian states have also been reported.

Some on Indian social media have been offering their homes to those being targeted in response, using hashtags like #SafeHaven.

In broader terms, there has been a spike in violence in Indian-administered Kashmir since Indian forces killed a popular militant in 2016. Significant numbers of young men have joined the insurgency in recent years and the funerals of well-known militants draw huge crowds who want to pay respects to "martyrs".

India has been accused of using excessive force to control protests with thousands of people suffering eye injuries or being blinded by pellet guns.

Indian Prime Minister Narendra Modi, who is facing an election later this year, has vowed a strong response and says he will give the military free rein.

The last time an attack on Indian forces close to this magnitude occurred in Kashmir was in 2016, when 19 soldiers were killed at a base. In response to that, India carried out "surgical strikes" which involved Indian soldiers crossing the de facto border to hit Pakistani posts.

This time analysts say heavy snow in the region could make that kind of limited ground response impossible. But there are fears that going further, for example with air strikes, could lead to Pakistani retaliation and a significant escalation.

So far India has focused on retaliation by economic and diplomatic means. It has revoked Pakistan's Most Favoured Nation trading status, raised customs duties to 200% and vowed to isolate it in the international community.