India has said it will ensure the "complete isolation" of Pakistan after a suicide bomber killed 46 paramilitary police in Indian-administered Kashmir. 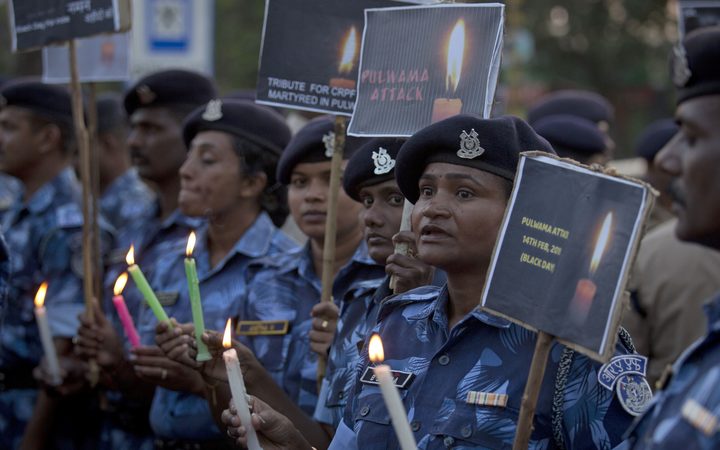 It claims to have "incontrovertible evidence" of its neighbour's involvement but has not provided it.

Pakistan denies any role in the attack by militant group Jaish-e-Mohammad, which is based on its soil.

Thursday's bombing of the convoy was the deadliest attack on Indian forces in the region for decades.

Federal Minister Arun Jaitley said India would take "all possible diplomatic steps" to cut Pakistan off from the international community.

But a Pakistani minister has asked India to reveal their evidence, and offered to help them investigate the attack.

There has been an insurgency in Indian-administered Kashmir since the late 1980s but violence has risen in recent years.

In the wake of the attack, authorities have imposed a curfew in parts of Hindu-majority Jammu city after an angry mob vandalised cars in a largely Muslim neighbourhood.

Both India and Pakistan claim all of Muslim-majority Kashmir but only control parts of it. 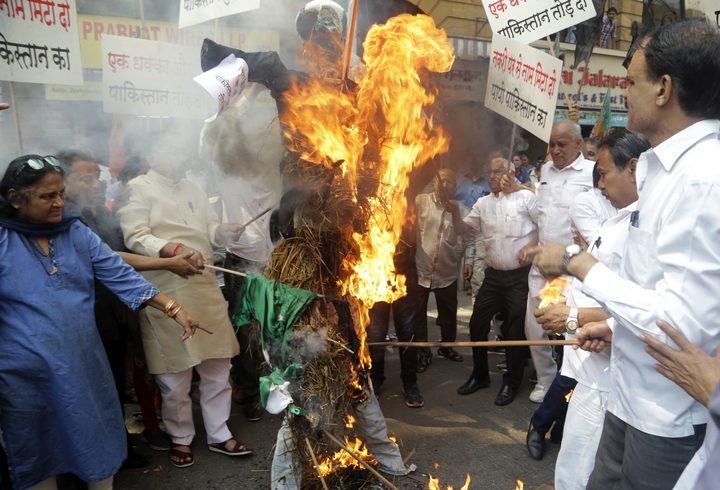 How will India 'punish' Pakistan?

India said Pakistan has long given safe haven to Jaish-e-Mohammad militants and accused it of having a "direct hand" in Thursday's attack.

It has called for global sanctions against the group and for its leader, Masood Azhar, to be listed as a terrorist by the UN security council.

India has tried to do this several times in the past but was repeatedly blocked by China, an ally of Pakistan.

Mr Jaitley set out India's determination to hold Pakistan to account when speaking to reporters after attending a security meeting early on Friday.

He also confirmed that India would revoke Most Favoured Nation status from Pakistan, a special trading privilege granted in 1996.

Pakistan said it was gravely concerned by the bombing but firmly rejected allegations that it was responsible.

The country's Information Minister, Fawad Chaudry, asked India to show its evidence, and offered to help the investigation into the attack.

"This needs an investigation."

India's Prime Minister Narendra Modi said in a speech that those behind the attack would pay a "heavy price", leading many analysts to expect further action from Delhi.

But they say that the government's military options appear limited due to heavy snow across the region.

After a 2016 attack on an Indian army base that killed 19 soldiers, Delhi said it carried out a campaign of "surgical strikes" in Pakistan-administered Kashmir, across the de facto border. But a BBC investigation found little evidence militants had been hit.

How did the attack unfold?

The bomber used a vehicle packed with explosives to ram a convoy of 78 buses carrying Indian security forces on the heavily guarded Srinagar-Jammu highway about 20km from the capital, Srinagar.

The bomber is reported to be Adil Dar, a high school dropout who left home in March 2018. He is believed to be between the ages of 19 and 21.

Soon after the attack, Jaish-e-Mohammad released a video in which a young man identified as Dar spoke about what he described as atrocities against Kashmiri Muslims. He said he had joined the group in 2018 and was eventually "assigned" the task of carrying out the attack in Pulwama.

He also said that by the time the video was released he would be in jannat (heaven).

Dar is one of many young Kashmiri men who have been radicalised in recent years. On Thursday, main opposition leader Rahul Gandhi said that the number of Kashmiri men joining militancy had risen from 88 in 2016 to 191 in 2018.

India has been accused of using brutal tactics to put down protests in Kashmir - with thousands of people sustaining eye injuries from pellet guns used by security forces.

There have been at least 10 suicide attacks since 1989 but this is only the second to use a vehicle.

Prior to Thursday's bombing, the deadliest attack on Indian security forces in Kashmir this century came in 2002, when militants killed at least 31 people at an army base in Kaluchak, near Jammu, most of them civilians and relatives of soldiers.

The latest attack comes amid a spike in violence in Kashmir that came about after Indian forces killed a popular militant, 22-year-old Burhan Wani, in 2016.

More than 500 people were killed in 2018 - including civilians, security forces and militants - the highest such toll in a decade.

India and Pakistan have fought three wars and a limited conflict since independence from Britain in 1947 - all but one were over Kashmir.

Started by cleric Masood Azhar in 2000, the group has been blamed for attacks on Indian soil in the past, including one in 2001 on the parliament in Delhi which took India and Pakistan to the brink of war.

Most recently, the group was blamed for attacking an Indian air force base in 2016 near the border in Punjab state. Seven Indian security personnel and six militants were killed.

India, the UK, US and UN have all designated it a "terrorist" organisation and it has been banned in Pakistan since 2002.

But Masood Azhar remains at large and is reportedly based in Bahawalpur in Pakistan's Punjab province. India has demanded his extradition but Islamabad has refused, citing a lack of proof.

He was arrested in Srinagar in 1999 but India released him as a part of a hostage exchange after an airliner was hijacked.

How have others reacted?

Mr Gandhi and two former Indian chief ministers of Jammu and Kashmir condemned the attack and expressed their condolences.

The attack has also been widely condemned around the world, including by the US and the UN Secretary General.

The White House called on Pakistan to "end immediately the support and safe haven provided to all terrorist groups operating on its soil".