India says it launched air strikes against militants in Pakistani territory, in a major escalation of tensions between the two countries. 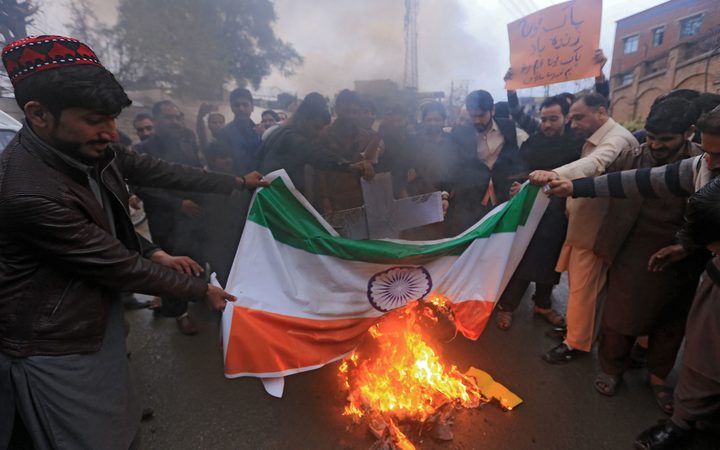 Pakistani protesters burn an Indian national flag during a protest in Peshawar on February 26, 2019, following the Indian Air Force strike launched on a Jaish-e-Mohammad camp at Balakot. Photo: AFP

The government said strikes targeted a training camp of the Jaish-e-Mohammad (JeM) group in Balakot.

Pakistan said its jets had forced back the Indian planes and denied there were any casualties.

Relations between the countries were strained by a militant attack on Indian troops in Kashmir earlier this month.

India accuses Pakistan of allowing militant groups to operate on its territory and says Pakistani security agencies played a role in the suicide attack on 14 February, which was claimed by JeM and killed 40 Indian troops.

Pakistan denies any role and says it does not provide safe haven to militants.

Balakot is in Pakistan's north-western Khyber Pakhtunkhwa province. Residents there told BBC Urdu they were woken by loud explosions. Pakistan condemned the strike and said it would respond "at the time and place of its choosing".

Both India and Pakistan claim all of Muslim-majority Kashmir, but control only parts of it. The nuclear-armed nations have fought three wars and a limited conflict since independence from Britain in 1947 - and all but one were over Kashmir.

What does India say happened?

Indian Foreign Secretary Vijay Gokhale told a news conference that the strikes had killed a "large number" of militants, including commanders, and had avoided civilian casualties.

"Credible intel [intelligence] was received that JeM was planning more suicide attacks in India. In the face of imminent danger, a pre-emptive strike became absolutely necessary," he said.

Indian Prime Minister Narendra Modi did not directly mention the air strikes when he addressed a political rally in Rajasthan later on Tuesday but he told cheering crowds: "I understand your enthusiasm and your energy. Today is a day we bow before our heroes."

India is due to hold elections by the end of May.

In Srinagar city, in Indian-administered Kashmir, residents expressed concerns over the spike in tensions.

"Whatever is happening between these two hostile neighbours, it's us who are in the middle of this war theatre," Shabir Aakhoon, a banker, said.

How has Pakistan responded?

Pakistan's army spokesman Major General Asif Ghafoor said the strikes caused no casualties. He tweeted that Pakistani jets were scrambled and forced the Indian planes to make a "hasty withdrawal", dropping their payload in an open area.

Indian aircrafts intruded from Muzafarabad sector. Facing timely and effective response from Pakistan Air Force released payload in haste while escaping which fell near Balakot. No casualties or damage.

"Once again [the] Indian government has resorted to a self-serving, reckless and fictitious claim," a statement issued after the meeting said.

"This action has been done for domestic consumption, being in an election environment, putting regional peace and stability at grave risk."