At least 21 people have died in one of the worst cold snaps to hit the US Midwest in decades. 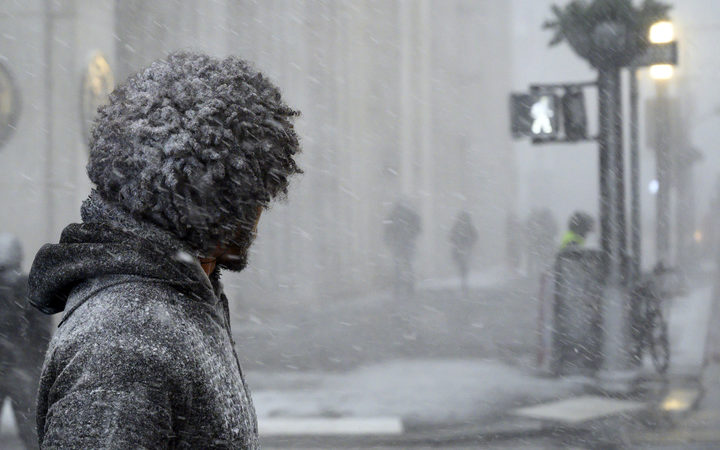 Ninety million people - a third of the US - have seen temperatures of -17C or below. Some 250 million Americans overall have experienced the "polar vortex" conditions.

Hospitals have been treating patients reporting frostbite as parts of the country ground to a halt.

Temperatures are expected to swing to above average over the weekend.

Homeless people have been particularly at risk, with warming shelters set up across cities.

But some still braved the freezing conditions and one woman, aged 60, was found dead in an abandoned house in Lorain, Ohio.

A hospital in Chicago has already treated 50 patients for frostbite, and some may end up losing a limb, CNN reports. Half of those patients were homeless individuals, while others had jobs that required them to be outdoors.

Some people were found dead a short walk from their homes:

Dangerous roads have also been a factor in the deaths. A man was fatally struck by a snow plough near Chicago on Monday and in northern Indiana, a 22-year-old police officer and his wife died after a collision on icy roads.

The icy cold is expected to loosen its grip on Friday (US local time).

By the end of the weekend, Chicago could see temperatures as high as 10C.

"It's going to be at least a 60-degree swing for Chicago," David Hamrick, a National Weather Service forecaster, told Reuters.

The sudden weather change coming this weekend may be the fastest warm-up on record, meteorologists say.

Luckily for #Chicago and the Midwest, the FASTEST 3-day warm-up on #record of 66° is underway: -21⬆️45° (Thu-Sun).
Hang in there!#PolarVortex #weatherwhiplash
Photo via @Pierre_Markuse pic.twitter.com/YeZER2enSd

But as the temperatures abruptly turn warmer, US emergency officials warn of flooding and utility risks.

Pipes can burst with such temperature fluctuations, and rapidly melting snow and ice could cause flooding, the Federal Emergency Management Agency cautioned. 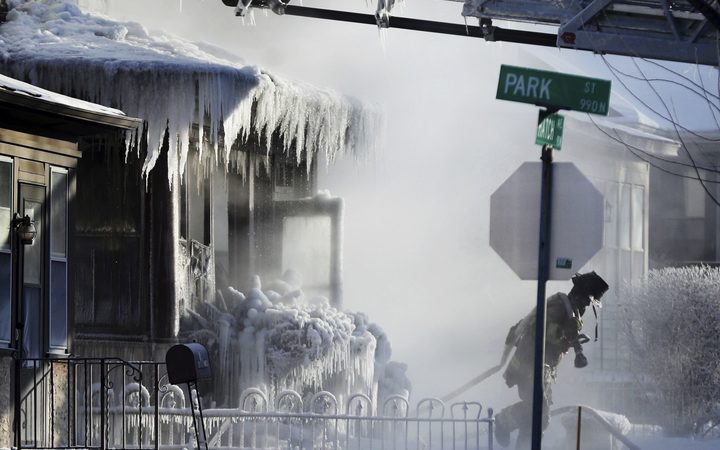 Firefighters at the scene of a house fire in Saint Paul, Minnesota during a arctic deep freeze on 30 January. Photo: David Joles/Star Tribune via AP

How cold did it get?

More than 30 record lows were broken across the Midwest.

Cotton, Minnesota, was the coldest place in the US on Thursday with a low of -48C based on preliminary data.

Chicago passed the record low for 31 January, while Mount Carroll has probably beaten the Illinois record with a morning temperature of -39C.

The official low temperature at Chicago this morning was -21F. This shatters the previous record for Jan 31st, which was -12F set back 1985. In records that date back to the 1870s, this is only the 15th time Chicago has seen a daily low this cold or colder, yesterday was 14th.

In news that pretty much no one wants to hear ... we broke numerous low temperature records this morning across the state! #iawx

(Yes, those are air temps, NOT wind chill.)

The chill drifted eastward on Thursday, bringing sub-zero temperatures to north-eastern cities such as Boston.

With wind chill factored in, temperatures of -40C in the Midwest and Great Lakes have felt closer to -53C, which is enough to cause frostbite in less than five minutes.

How is the cold snap affecting daily life?

The Arctic weather could cost the US billions of dollars. In 2014, a similar polar freeze cost the country an estimated $5bn, CBS News reports.

In Minnesota and Michigan, residents were asked by gas companies to turn down their home thermostats to help handle heating demands.

Consumers Energy, a natural gas provider in Michigan, had a fire on Wednesday morning that damaged equipment and temporarily affected how much gas could be sent out to customers.

We understand the timing of our request is not ideal given today’s cold temperatures, however, without additional reductions, we run the risk of not being able to deliver natural gas to families and critical facilities across Michigan – a scenario none of us want to encounter.

Andrea Cusack, a pharmacist in Michigan, began using her snowmobile to deliver essential prescriptions to snowed-in residents, according to the Lansing State Journal.

More than 2300 flights have been cancelled and another 3500 delayed due to the polar vortex.

Social media has been full of photos and memes showcasing just how shockingly cold the Midwest became.

‘I said, “I do not fear these pants with nobody inside them.” I said, and said, and said those words. I said them. But I lied them.’ -Dr Seuss . . Day 4 of the #polarvortex brings us frozen pants ! I hate to say it but I’m going to be a little sad when it warms up and all our fun melts away. . . . #polarvortex #boldnorth #mntough #minnesotan #makingthemostofit #nempls #neminneapolis #northeastmpls #frozenpants

Areas across the provinces of Ontario, Quebec and Saskatchewan, and in the north, remain under extreme cold warnings.

But many parts of the country are moving towards more seasonable temperatures on Friday and over the weekend.

In Toronto, wind chills near -30C were expected to continue early Friday before beginning to warm.

There were also winter storm and blizzards warnings active across the country from the east to the west coast.

Environment Canada was urging residents to limit their exposure to cold and keep pets indoors.

Canada did not experience a spate of deaths linked to the polar vortex like the US.

Stephen Hwang, an associate professor with the University of Toronto's department of medicine, suggested that Canadian cities and public health authorities probably had more experience dealing with the deep cold.

Most homeless shelters also already had protocols in place for when the extreme cold hits.

But he said it was still "fortunate" that cities like Toronto, where homeless shelters have been stretched for resources in recent months, did not see any cold-related deaths among its most vulnerable citizens.