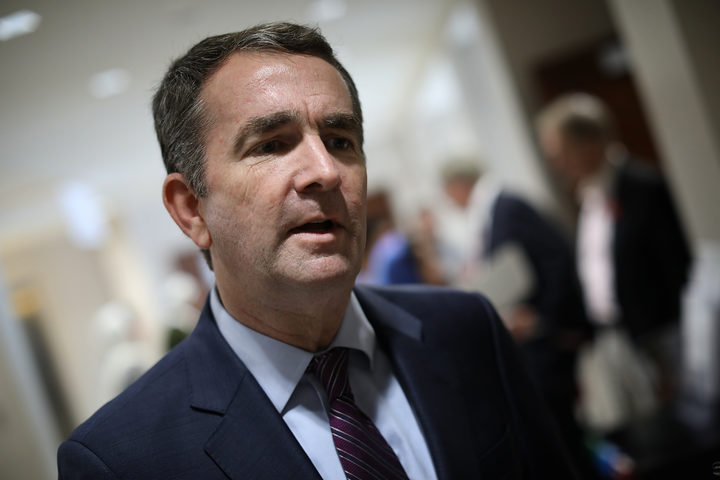 "I am deeply sorry for the decision I made to appear as I did in this photo and for the hurt that decision caused then and now," he said in a statement.

The picture showed a man in blackface and another man in Ku Klux Klan robes.

It appeared on a page with other photos of Mr Northam as well as personal details about him.

He did not elaborate on which costume he was wearing, but said he appeared in a photograph that was "clearly racist and offensive".

What else has Ralph Northam said?

"This behaviour is not in keeping with who I am today and the values I have fought for throughout my career in the military, in medicine, and in public service. But I want to be clear, I understand how this decision shakes Virginians' faith in that commitment," the governor said in a statement after the image was made public.

He continued: "I recognise that it will take time and serious effort to heal the damage this conduct has caused. I am ready to do that important work. The first step is to offer my sincerest apology and to state my absolute commitment to living up to the expectations Virginians set for me when they elected me to be their governor."

Mr Northam later released a video statement via Twitter in which he said he was "deeply sorry" for the offence the image had caused.

"I accept responsibility for my past actions and I am ready to do the hard work of regaining your trust," he said.

My fellow Virginians, earlier today I released a statement apologizing for behavior in my past that falls far short of the standard you set for me when you elected me to be your governor. I believe you deserve to hear directly from me. pic.twitter.com/1rSw1oxfrX

The yearbook page, which came from the paediatric neurologist's time at Eastern Virginia Medical School, was first published by conservative website Big League Politics. He had earlier graduated from Virginia Military Institute.

The Virginian-Pilot newspaper tweeted a picture of the page which it said it obtained from the medical school library.

An official from the medical school verified the photo and told the Huffington Post it came from a "student-produced publication".

The page, which features Mr Northam's full name and photos of the future doctor and politician, also included a quote from a Willie Nelson song that read: "There are more old drunks than old doctors in this world so I think I'll have another beer."

The Virginia Legislative Black Caucus, which comprises African Americans elected to the Virginia General Assembly, said it was "still processing what we have seen about the governor" but described the images as "disgusting, reprehensible and offensive".

"These pictures rip off the scabs of an excruciatingly painful history and are a piercing reminder of this nation's sins. Those who would excuse the pictures are just as culpable," it said in a statement.

The photo also prompted a swift backlash from conservatives, including Jack Wilson, the chairman of the Republican Party of Virginia, who called on Mr Northam to step down.

"Racism has no place in Virginia," he said in a statement. "These pictures are wholly inappropriate. If Governor Northam appeared in blackface or dressed in a KKK robe, he should resign immediately."