The US will shiver this week in a once-in-a-generation deep freeze, forecasters warn. 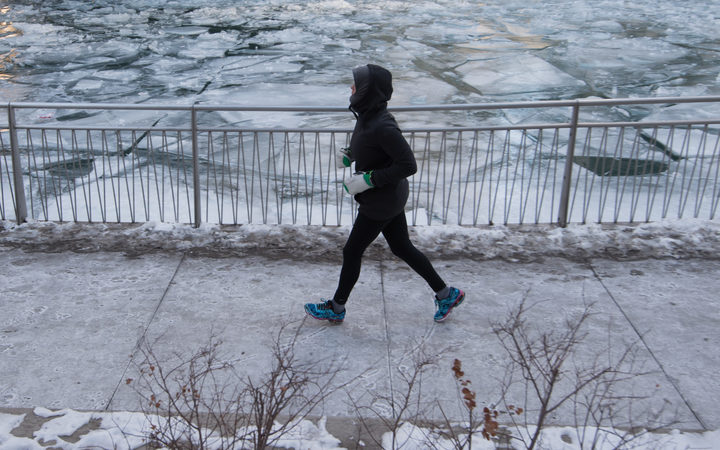 Chicago is expected to be colder than Antarctica Photo: AFP

The most extreme arctic blasts, caused by a spinning pool of cold air known as the polar vortex, could bring temperatures as low as -53C (-64F).

Weather officials in the state of Iowa have warned people to "avoid taking deep breaths, and to minimise talking" if they go outside.

At least 55 million people are forecast to experience below zero temperatures.

A state of emergency has been declared in the Midwestern states of Wisconsin, Michigan and Illinois as well as in the normally more clement southern states of Alabama and Mississippi.

John Gagan, a National Weather Service (NWS) meteorologist, said: "The intensity of this cold air, I would say, is once in a generation."

The NWS is warning that frostbite is possible within just 10 minutes of being outside in such extreme temperatures.

The coldest temperatures are expected to hit from Tuesday to Thursday, with forecasters predicting that Chicago will be colder than Antarctica.

As much as 2ft (60cm) of snow is forecast in Wisconsin, and 6in is expected in Illinois.

Alabama and another southern state, Georgia, are expecting snow, too.

How did President Trump inject controversy?

President Donald Trump, who has questioned whether humans are responsible for climate change, tweeted about the conditions.

"What the hell is going on with Global Warming?" he said. "Please come back fast, we need you!"

In the beautiful Midwest, windchill temperatures are reaching minus 60 degrees, the coldest ever recorded. In coming days, expected to get even colder. People can’t last outside even for minutes. What the hell is going on with Global Waming? Please come back fast, we need you!

But one of the US government's own meteorological agencies, the National Oceanic and Atmospheric Administration, posted what was widely interpreted as a rebuttal to the president.

Forecasters are attributing this cold snap to a sudden warming above the North Pole, caused by a blast of hot air from Morocco last month.

The world's leading scientists have said that climate change is primarily human-induced and can lead to harsher winters.

What impact is the weather having?

Chicago police say people are being robbed at gunpoint for their coats.

Those wearing Canada Goose jackets, which can cost as much as £900 ($1,100), have been targeted, local media report.

Tickets to see the award-winning musical Hamilton are reportedly selling for $70, half their usual value, as theatre-goers avoid venturing out in the extreme conditions.

And the city's Brookfield Zoo will be shut on Wednesday and Thursday for only the fourth time in 85 years.

More than 1,100 flights were cancelled into or out of the US on Tuesday, including some to Atlanta, Georgia, where the Super Bowl will take place on Sunday.

Predominantly in the Midwest, thousands of schools and businesses have been closed as have a number of government agencies.

Dozens of so-called warming centres - emergency shelters for those with nowhere to go - have been opened in US cities, including in Milwaukee.

"This is not the night for anyone to stay outdoors," said Mayor Barrett.