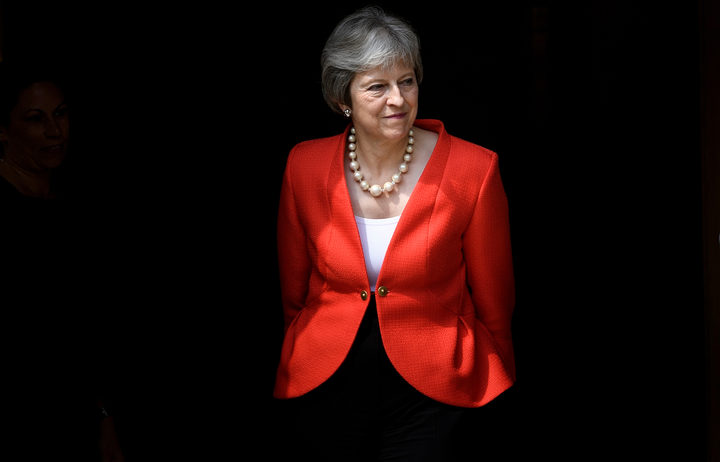 With less than four months left until the United Kingdom is due to exit on 29 March, the world's fifth largest economy was facing the prospect of a disorderly no deal divorce or another divisive referendum on Brexit.

Ministers lined up to express loyalty to Mrs May, who said she would fight a vote of no confidence in her leadership of the Conservative Party with "everything I have got".

Speaking outside her Downing Street office, she said a change of leadership would put Britain's future at risk and jeopardise Brexit negotiations.

Justice Secretary David Gauke warned that if she lost then Brexit would have to be delayed.

Graham Brady, chairman of the Conservative Party's so-called 1922 committee, said the threshold of 15 percent of the parliamentary party seeking a confidence vote had been exceeded.

A ballot will be held between 1800 and 2000 GMT in a room at the House of Commons and an announcement made as soon as possible afterwards, he said.

Mrs May could be toppled if 158 of her 315 lawmakers vote against her, though a big mutiny could also scupper her leadership.

Brexit is Britain's most significant political and economic decision since World War II.

The ultimate outcome will shape Britain's $US2.8 trillion ($NZ4 trillion) economy, have far reaching consequences for the unity of the United Kingdom, and determine whether London can keep its place as one of the top two global financial centres.

The British pound, which has lost 25 cents against the US dollar since the 2016 referendum, fell on the news of a confidence vote but then rose to 1.2548 on news that Brexit might have to be delayed.

Ever since formally triggering the Brexit divorce in March 2017, Mrs May has sought to find a way to keep Britain closely aligned with the EU after its exit.

But earlier this week, she abruptly pulled a parliamentary vote on her deal in the face of ridicule from lawmakers. She then rushed to Europe in an attempt to get assurances from EU leaders about the deal.

Brexit-supporting lawmakers in her party have accused Mrs May of betraying Brexit in negotiations while opponents say she has negotiated a deal that is the worst of all worlds - out of the EU but with no say over the rules it has to abide by.

A schism over Europe in the Conservative Party over Britain's relationship with the EU contributed to the fall of all three previous Conservative premiers - David Cameron, John Major and Margaret Thatcher.

Brexiteers in her party have accused Mrs May of selling out Brexit in negotiations, though if they do manage to topple her, Brexit might be delayed, or even cancelled.

"Theresa May's plan would bring down the government if carried forward," lawmakers Jacob Rees-Mogg and Steve Baker said in a statement.

"But our Party will rightly not tolerate it. Conservatives must now answer whether they wish to draw ever closer to an election under Mrs May's leadership. In the national interest, she must go."

But some ministers expressed support for her with Home Secretary Sajid Javid saying a leadership contest was the last thing Britain needed.

"The last thing our country needs right now is a Conservative Party leadership election. Will be seen as self-indulgent and wrong," Mr Javid said.

The EU's top court ruled earlier this week that Britain could cancel its official Article 50 notice to leave the bloc without permission from the other EU members and without losing any special privileges.

Justice Secretary Gauke said that if MRs May lost, Brexit would have to be delayed.

"In terms of negotiating any type of arrangement with the European Union, I think it is inevitable that if she were to lose the vote tonight there would be need to be a delay in Article 50," Mr Gauke told BBC radio in an interview.

"I don't think we would be leaving the European Union on the 29th of March."

What happens during a vote of no confidence?

All Conservative MPs can vote. Mrs May would need a simple majority of the total votes registered in order to win. If all elected lawmakers cast their ballots, that would currently mean 158 votes.

If Mrs May wins, she remains in office and cannot be challenged again for 12 months. If she loses, she must resign and is barred from standing in the leadership election that follows.

However a significant mutiny could make her leadership untenable.

What happens if Mrs May loses?

There will be a leadership contest to decide her replacement. Her replacement will become prime minister, but a general election will not automatically be triggered.

If several candidates come forward, a secret vote is held among Conservative MPs to whittle down the field. The candidate with the fewest votes is removed and Conservative lawmakers vote again. The process is repeated, on Tuesdays and Thursdays, until only two candidates remain.

These two candidates are then put to a postal ballot of the wider Conservative Party membership. Participants need to have been party members for more than three months.

When David Cameron decided to step down as prime minister and Conservative leader after the EU referendum in 2016, five candidates came forward. The field was narrowed to Mrs May and then-junior minister Andrea Leadsom, but she pulled out before members voted, leaving Mrs May to become leader unopposed.