UK shares plunged and recorded losses not seen since the aftermath of the Brexit vote as a sell-off swept global markets following the arrest of a top Huawei executive that renewed worries about US-China trade tensions. 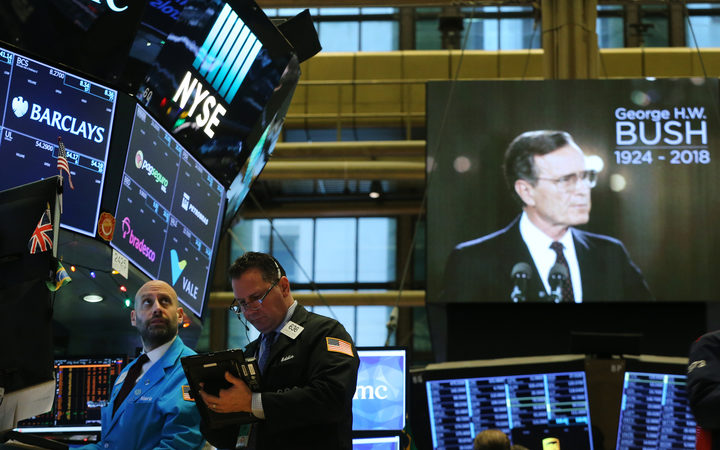 Traders work on the floor of the New York Stock Exchange (NYSE) as a picture of former President George H.W. Bush appears on a screen. Photo: AFP

The FTSE fell 3.2 percent to 6674.01 points, its worst performance since June 2016, when Britons voted to leave the European Union.

The midcap FTSE 250 was down 2.8 percent with domestically focused stocks slightly less affected than the wider European market before a crucial Brexit vote next week.

UK Prime Minister Theresa May is battling to get her Brexit deal through parliament in a vote scheduled for Tuesday. She is facing heavy opposition from lawmakers who backed Britain leaving the bloc and those who wanted to remain in the EU.

Losses on the British blue-chip index were in line with European peers with falling oil and commodities prices hitting heavyweight oil and mining stocks.

The oil and mining sectors were down 4.5 percent and 4 percent respectively as OPEC ended a key meeting without making a decision on crude output.

"The Huawei arrest appears to be the straw that broke the camel's back", wrote Connor Campbell, an analysts at Spreadex.

"The rapidly dwindling good-feeling towards the US and China's vague trade war ceasefire turned actively hostile on Thursday, investors fearing that, 90-day truce or not, the relationship between the two superpowers might be about to take a turn for the worse," he wrote.

Among other decliners, bookies stocks were hit by a report that gambling companies have agreed to stop advertising during live sport broadcasts, such as football matches, amid growing pressure from politicians.

On the midcap index, Indivior topped the fallers, down 11.4 percent, as investors moved out of the drugmaker ahead of its demotion to the small-cap index later this month.

The stock has also been hit hard by a US court ruling late last month that allowed a rival to sell a copycat version of its blockbuster Suboxone drug.

US 10-year yields also slipped to three-month lows as traders scaled back expectations on the number of rate hikes the Federal Reserve might be able to deliver amid weakening economic data and trade conflict.

In contrast, Italian bonds sold off and the gap between 10-year Italian and German bond yields widened around 20 basis points, as higher-risk assets weakened and sources said Italy's ruling League party was resisting cuts to the 2019 budget deficit.

World stocks fell 2.5 percent. US equities ceded all their gains for the year and a pan-European European equity index suffered a 3.3 percent loss.