Global stocks have fallen, plagued by a flattening yield curve that sparked concerns about an economic slowdown in the United States and weakening expectations of a lasting US-China trade truce, while the dollar steadied. 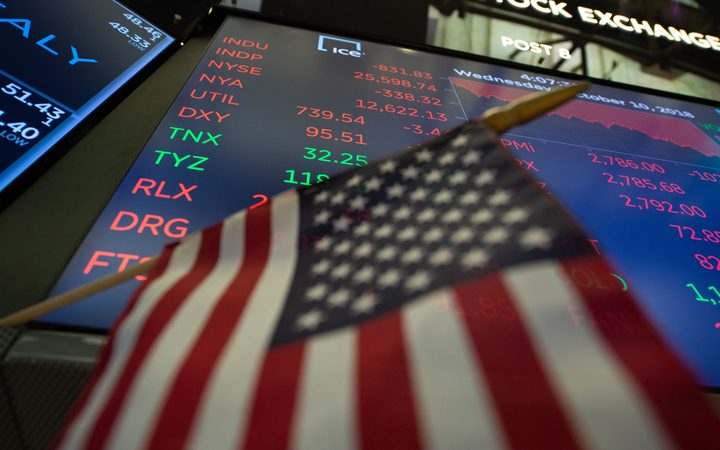 US markets were closed to mark former President George H.W. Bush's death, but the effect of Wall Street's turmoil in the previous session, when New York-listed shares tumbled more than three percent, was felt in Asia and Europe.

Tuesday's (Wednesday NZ time) markets chaos came a day after equities boomed on optimism that China and the US had temporarily called a tariff ceasefire to sort out their trade dispute. But doubts began soon after along with President Donald Trump threatening "major tariffs" on Chinese imports if his administration failed to reach an effective trade deal with Beijing.

"As I look into next year, most expectations for further gains have been pared back. Investors have gone from extended bullishness at the start of the year on equities to an uncomfortable neutrality," said Paul O'Connor, head of multi-asset at Janus Henderson.

Markets across the world have been rattled by recession fears, exemplified by the flattening US Treasury yield curve.

The benchmark Treasury 10-year yield fell to its lowest point since mid-September on Tuesday, while the spread between the 10-year yield over its two-year counterpart also shrank to the smallest since the start of the financial crisis in January 2008. That signalled to some investors an approaching US economic slowdown.

The flattening of the curve gained momentum after last week's signal by the Federal Reserve that it may be nearing an end to its three-year rate-increase cycle.

The dollar steadied on Wednesday after it took a hard hit in the early reaction to recession concerns and the initial thaw in trade tensions between Washington and Beijing sapped demand for the safe-haven greenback.

Gold, which moves inversely with the dollar, slipped on expectations of more rate hikes following remarks from a US Federal Reserve official and as some investors booked profits after prices climbed to their highest in more than five weeks.

Palladium, on the other hand, surpassed the bullion for the first time in about 16 years, to hit a record high of $US1,263.56 per ounce as higher speculative interest and larger supply deficit boosted the auto-catalyst metal.

Markets are also bracing for more news on Brexit. British Prime Minister Theresa May suffered embarrassing defeats on Tuesday, the start of five days of parliamentary debate over her plans to leave the European Union.

The threat of slowing economic activity also weighed on oil prices, but oil prices went higher on Wednesday ahead of a meeting of the world's biggest exporters who will discuss cutting output to help shore up prices and curb excess supply.