A Greek merchant ship dating back more than 2400 years has been found lying on its side off the Bulgarian coast. 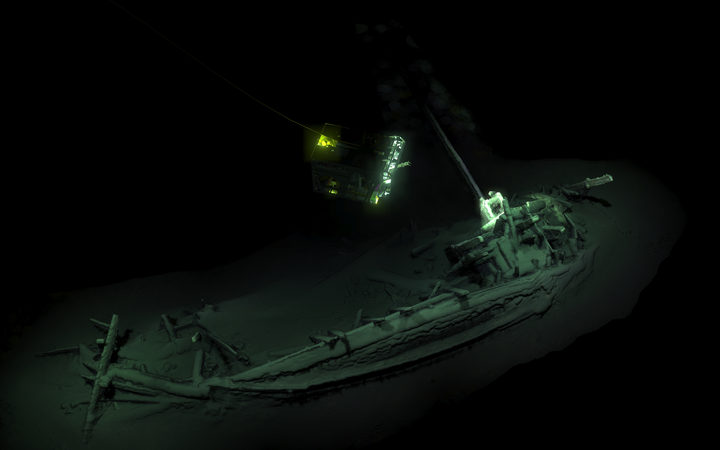 An ancient Greek trading ship dating back more than 2400 years has been found virtually intact at the bottom of the Black Sea, researchers say. Photo: Black Sea MAP/EEF Expeditions

The 23m wreck, found in the Black Sea by an Anglo-Bulgarian team, is being hailed as officially the world's oldest known intact shipwreck.

The researchers were stunned to find the merchant vessel closely resembled in design a ship that decorated ancient Greek wine vases.

The rudder, rowing benches and even the contents of its hold remain intact.

"It's like another world," Helen Farr from the expedition told the BBC.

"It's when the ROV [remote operated vehicle] drops down through the water column and you see this ship appear in the light at the bottom so perfectly preserved it feels like you step back in time."

The reason the trading vessel, dating back to around 400 BC, has remained in such good condition for so long is that the water is anoxic, or free of oxygen. Lying more than 2000m below the surface, it is also beyond the reach of modern divers.

"It's preserved, it's safe," she said. "It's not deteriorating and it's unlikely to attract hunters."

The vessel was one of many tracking between the Mediterranean and Greek colonies on the Black Sea coast. It was discovered more than 80km off the Bulgarian city of Burgas.

The team used two underwater robotic explorers to map out a 3D image of the ship and they took a sample to carbon-date its age.

The vessel is similar in style to that depicted by the so-called Siren Painter on the Siren Vase in the British Museum. Dating back to around 480 BC, the vase shows Odysseus strapped to the mast as his ship sails past three mythical sea nymphs whose tune was thought to drive sailors to their deaths.

As yet the ship's cargo remains unknown and the team say they need more funding if they are to return to the site.

"Normally we find amphorae [wine vases] and can guess where it's come from, but with this it's still in the hold," said Dr Farr.

"As archaeologists we're interested in what it can tell us about technology, trade and movements in the area."

Over the course of three years the academic expedition found 67 wrecks including Roman trading ships and a 17th Century Cossack trading fleet.