An Australian couple who searched for a boat online are now the proud new owners of an ex-New Zealand warship. 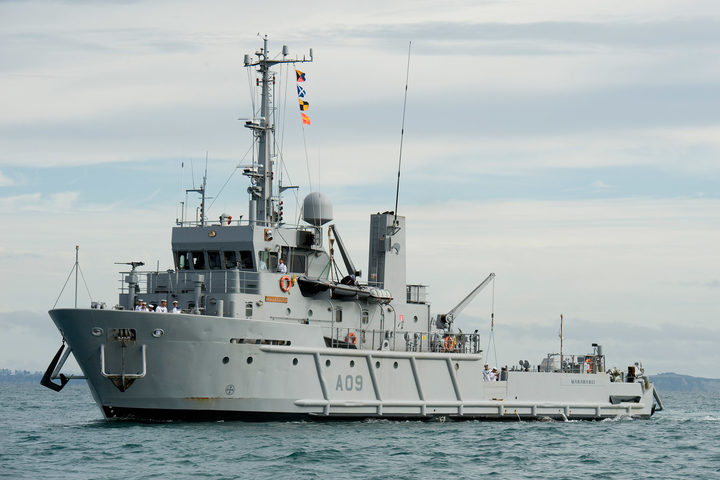 Paul and Wilma Adams of Newcastle have sailed their 44-metre ship, the decommissioned Royal New Zealand Navy dive tender Manawanui, across the Tasman and docked it at their hometown of Carrington.

"Overwhelmed," Ms Adams said of how she felt about owning the ship.

"It's not just the size. Paul looked regularly on websites to find a suitable ship and when he came out with it, it was like, 'Hey darling, I've found the ship!'

The Manawanui is built for diving missions in the middle of the sea. It has a decompression chamber, a domed bell for deep diving and a 15-tonne crane for heavy lifting overboard.

Mr and Ms Adams' plan to use their ship, bought for a sum in the vicinity of "a few hundred thousand dollars", to preserve the fuel-laden, mostly Japanese vessels that sank in the South Pacific during World War II.

Many of the wrecks are corroded and starting to leak oil from the ocean floor.

Mr and Ms Adams have feared a looming ecological disaster ever since they visited Micronesia's Chuuk Lagoon, where the US Navy sank dozens of Japanese ships in Operation Hailstone in 1944.

"While we were diving on one of the ships we saw this huge blob of black oil come out, drift up to the top and disperse," Mr Adams said.

"The long and the short of it is, nothing's being done.

"So we decided we'd do something."

The couple plan to lock guard the wrecks against leakage by using cathodic protection, with blocks lowered underwater from the Manawanui.

The method works by guarding vulnerable metal against corrosion by making it act as an electrical cathode.

Race against time to stop oil

Responsibility for the 70-year-old wrecks of the South Pacific has grown murky over time. Many of the ships were once part of the Japanese merchant navy.

A corrosion survey of the Chuuk Lagoon in 2002 by Dr William Jeffery, a maritime archaeologist and assistant professor of archaeology at the University of Guam, found that "many of the wrecks … will retain their existing integrity for only the next ten to fifteen years before they begin to undergo significant collapse".

Dr Jeffery, who is advising the Adamses, said the governments of the Federated States of Micronesia, USA, and Japan all have conservation or historical reasons to protect the wrecks, but Japan's surrender of its weapons at the end of the war might legally clear it of responsibility for its sunken ships.

Nonetheless, a Japanese group called the Japanese Mine Action Service is currently in Chuuk doing a clean-up.

Dr Jeffery said his contacts in Chuuk and Micronesia are happy to work with the Adamses, subject to their mission being funded - the couple are appealing for financial and in-kind help through their website.

"The project will need permission and support from the Chuuk and [Micronesian] governments," Dr Jeffery said.

"So while it's a private mission, it will be implemented in accordance with the laws and procedures required by these governments.

"The archaeological, social, cultural and biological values of the wrecks will be taken into account, but they won't be a focus at this stage and everything will be done not to impact these values."

For Mr Adams, the mission has become a consuming passion into which he has poured thousands of dollars and countless hours.

Buying the ship was just the beginning, he said.

"It just keeps flashing red lights that this is urgent, and nobody seems to be picking up on that just yet," Mr Adams said.

"There's about 3000 wrecks out there. Three hundred of those were oil tankers. They're at the bottom of the ocean, and they're starting to leak."