A fourth tiger shark has been captured in drumlines and killed off the coast of North Queensland where a young girl and woman were mauled by sharks. 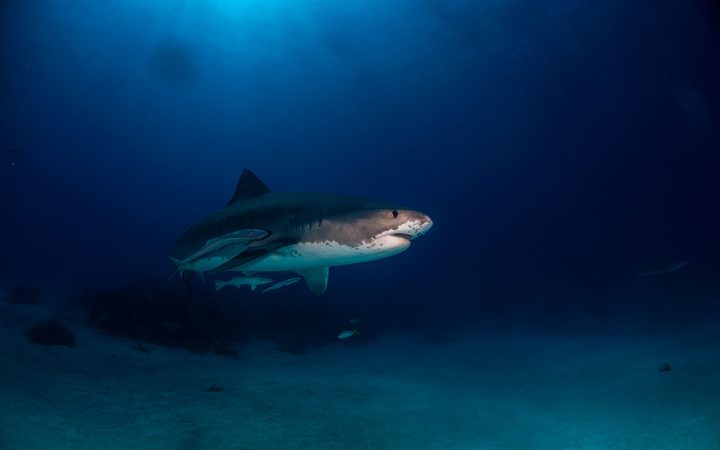 The 3.7m tiger shark is the largest caught since the attacks on 46-year-old Tasmania woman Justine Barwick and 12-year-old Melbourne schoolgirl Hannah Papps in the Whitsundays last week.

A spokesperson from Queensland Fisheries could not confirm whether the shark was responsible for either attack but said it was dangerous.

"This shark, like the others, would pose a serious threat to people swimming in the Cid Harbour waters," he said.

"The intention is to remove large, dangerous sharks from the area and reduce the risk to people."

Sally McAdam, who lives on a boat on Cid Harbour, said she saw Queensland Fisheries kill two sharks on Saturday.

"We could see the fisheries boat come towards this drumline … we just watched them and they fired another shot at the shark and they tried to pull in the bait line but obviously the shark was still thrashing around from having a big hook in its mouth and it was really quite sad and terrible," Ms McAdam said.

"Another boat notified fisheries that their drum in the southern part of the bay was going berserk and we watched the fisheries boat come in and fire shots and it was all a bit distressing," Ms McAdam said.

"I thought it was quite well known that around the [Whitsunday] islands it was a shark habitat and swimming was always at your own risk, so I think it's been a massive knee-jerk reaction to a problem that's created from phobias."

Tasmanian woman Justine Barwick is lucky to be alive according to rescuers and nearby holidaymakers who witnessed the woman's ordeal after being bitten by a shark in the Whitsundays.

Ms Barwick, an aged care worker, remains in the intensive care unit at the Royal Brisbane and Women's Hospital after undergoing reconstructive surgery on her injured right leg.

Her husband Craig Barwick said he could understand the state government's response, but acknowledged that attacks were rare.

"The reaction by the Queensland government setting drum lines and culling sharks is understandable and in some ways I appreciate it," Mr Barwick said.

"However, we have to understand that while there have been two attacks in rapid succession, shark attacks are rare and sharks play an important role in the ecosystem of the Great Barrier reef."

Marine Conservation groups have attacked the Queensland government over the capture and killing of the sharks.

"We feel that it is a cruel punishment, there's no way of knowing that these are the sharks are the actual culprits," Mr Chlebeck said.

"These actions are just providing people with a false sense of security and really aren't addressing the problem."

The Humane Society said they would take legal action over the use of drum lines in the protected Great Barrier Reef.

"That is going to be heard by the Queensland Administrative Appeals Tribunal on January 30 next year."

Queensland Fisheries will continue to use drumlines in the region over the coming days and are urging people to stay out of the affected waters.